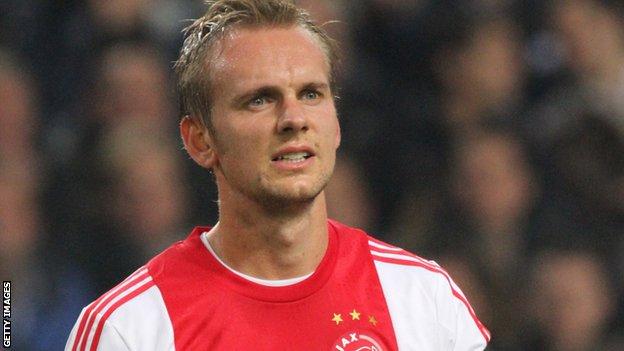 New signing Siem de Jong says Newcastle will be aiming for the top four in the Premier League and qualifying for the Champions League this season.

The 25-year-old Dutchman joined on a six-year contract for an undisclosed fee from Ajax, who he captained to four Eredivisie titles, on Tuesday.

Number 10 is my favourite position. I hope I can play in that position but I even played as a striker at Ajax

"I think we're aiming for fourth and trying to be in the Champions League," De Jong told BBC Newcastle.

"I think that is a nice goal, a tough goal, but one we're trying to aim for."

Switzerland-born De Jong made his international debut for the Netherlands in August 2010 and has won six senior caps, scoring two goals, but was not selected for the World Cup.

His brother Luuk, 23, was on loan at St James' Park from Borussia Monchengladbach for the second part of last season but the club struggled for form.

"For him it was a pity as it was quite a difficult time and he wasn't at his best but he said it was a really nice club, stadium and fans and a nice city to live," added De Jong.

"Of course my brother played here last season and so I talked to him about it.

"The club also followed me the last three or four years so for me it was quite a logical step."

During his time at the Amsterdam Arena, De Jong played alongside Premier League players Luis Suarez, Christian Eriksen and Jan Vertonghen, and he believes he is just as capable of adapting to the Premier League.

"It's good that a lot of ex-players that I played with had a good step to England and I hope I can do the same," he said.

"I think I'm a smart player who looks for space during the game; I can score goals and give assists and always work hard when we do and don't have the ball.

"Number 10 is my favourite position. I hope I can play in that position but I even played as a striker at Ajax a lot of times, but not a real striker but more like one that comes into the midfield sometimes."