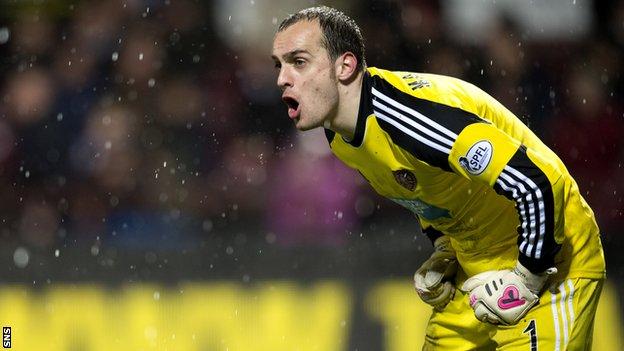 Craig Sibbald has also signed an extension to his current contract which will see him tied to Falkirk until 2017.

"I rate Jamie highly and it was a case of convincing him of our goals and aspirations this season," said Houston.

"I was delighted when he chose to join us despite a lot of competition."

MacDonald was a free agent after being released following manager Gary Locke's Tynecastle departure and joins on a one-year deal.

Taiwo and player-coach Maybury were two of the players told they had no future at Easter Road after Edinburgh rivals Hibs were relegated to the Championship.

Former Ross County winger Cooper impressed on trial and has signed a two-year deal, while defender Grant is the son of the former Celtic player of the same name and was with Norwich.

"Tom will add a bit of dig and experience to our midfield," Houston told the Falkirk website.

"Alex is very fast and has a great left foot. He will bring us a range of options in our game-plan this coming season."

The club also confirmed that goalkeeper Gregor Amos has signed up for another year and he will continue his development in the Under-20 side.