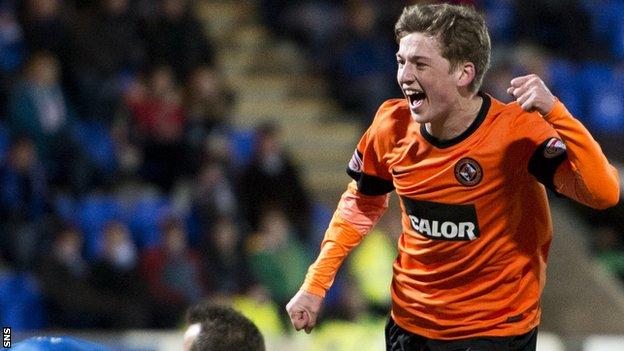 Ryan Gauld paid tribute to Dundee United for helping him seal his move to Sporting Lisbon.

The 18-year-old signed a six-year contact with a 60m euro (£48m) buyout clause after the 18-times Portuguese champions agreed to pay around £3m.

"The club have been great through it all. They've not stood in my way, let me speak to them and helped the deal go through," said the forward.

"It's been a wild few days. It was really an option I couldn't turn down."

The Scotland Under-21 international scored eight goals in 38 games last term and was shortlisted for the PFA Scotland young player of the year award.

He joins a squad that will compete in this season's Champions League, and a club famed for bringing through the likes of Cristiano Ronaldo and Figo.

"I'm not really thinking of that just now," said Gauld. "I'm just looking forward to playing for the club and trying to make a good show of myself.

"They've paid a big price but hopefully I can put in good performances for them, establish myself and just do well for them.

"It will be hard but I'm also really looking forward to it. It's going to be a good challenge for myself and I'm excited by it."

"When I first heard I was a bit overwhelmed by it," he admitted.

"That's what I've always wanted to do since I was young - play football abroad - so hopefully it'll live up to what I'm expecting.

"It's a bit unbelievable just now but hopefully in a few years I can live up to that price tag."

Gauld also paid tribute to the United supporters who had taken him to their hearts since he made his debut at 16.

He said: "They've been absolutely superb. Ever since I've played my first game they've supported me, even when I've not been playing too well so I'd like to thank them for that.

"And, also the coaches at Dundee United because they're the ones that have developed me as a player.

"The gaffer has given me a chance to show what I can do and I'd just like to say thanks to everybody at Dundee United for allowing me this chance."