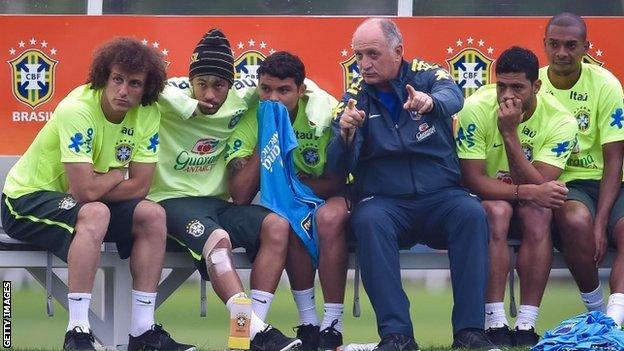 Brazil coach Luiz Felipe Scolari says his team have one hand on the World Cup as he rounded angrily on his critics ahead of Friday's quarter-final against Colombia in Fortaleza.

Scolari insists the 2002 World Cup winners are on course to reclaim the trophy on home soil.

"Does Brazil continue to have one hand on the trophy? Yes," he said.

Our supporters want us to tell them what we want, how we want to win and how we are going to get it. We continue with the same speech

"We are going on to the fifth step and there are seven steps."

Brazil, who have won the World Cup five times, won two of their three group games, beating Croatia and Cameroon but drawing with Mexico.

They then reached the last eight with a penalty shoot-out win over Chile.

As Brazil prepare to face Colombia, who beat Uruguay in the last round, Scolari has found himself under fire from former players, including 1970 World Cup-winning captain Carlos Alberto, for using sports psychologist Regina Brandao.

She regularly works with Scolari to help players deal with the pressure they are under.

Several of them have broken down while singing the national anthem before matches, while a number were in tears after the win over Chile.

Scolari says Brandao's visits have been "scheduled and organised", adding she would "come again on Sunday and Monday".

"She isn't paid anything to do this," said Scolari. "I admire psychologists. You can try to seek more information."

The 65-year-old, who led Brazil to 2002 World Cup success in Japan and South Korea, also took issue with members of the media who were excluded from a briefing with him earlier this week.

Scolari also repeated the optimistic messages he delivered about Brazil's hopes before the World Cup.

"Don't forget those statements," he said. "They were all fantastic. Our population, our supporters, don't expect any different.

"They want us to tell them what we want, how we want to win and how we are going to get it. We continue with the same speech."