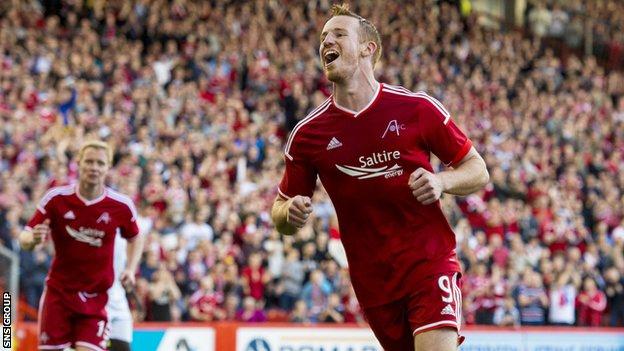 Manager Derek McInnes is eyeing a run in the Europa League after Aberdeen's 5-0 success over FK Daugava Riga.

Adam Rooney scored twice as the Dons opened their season with a comfortable first leg win in the first round of qualifying.

"Hopefully, we can get a bit of a journey from this European adventure," McInnes told BBC Radio Scotland.

"Some of the best moments this club have had have been in Europe and financially it's important."

Aberdeen, who famously beat Real Madrid to win the Cup-Winners' Cup in 1983, have not played in Europe since a chastening 8-1 aggregate defeat to Sigma Olomouc five years ago.

They had a real lack of discipline. I was getting really worried for some of my players

There may have been a few nerves at Pittodrie at the prospect of playing a side 19 games into their league campaign.

However, the Latvian side were on the back foot immediately and resorted to terrible rough house tactics, ending a one-sided match with nine men.

The Dons recovered from an early Barry Robson penalty miss when Shaleum Logan powered in a header and Niall McGinn and Jonny Hayes added to Rooney's brace.

"It was very comfortable," added McInnes. "A good night's work.

"When we miss the penalty early on there might be a bit of doubt, with the players thinking it's going to be one of those nights - and we did pass up a few opportunities.

"But to get that control of the game we had to work hard and I thought we had a good attitude and a good tempo.

"Some of our shooting could have been better but considering where we are in the season, there was still some real good play."

Peter Pawlett limped off with a swollen ankle early in the second half and McInnes was glad no more of his players were hurt as the visitors made a series of reckless tackles.

"Hopefully it's nothing too sinister," he said of Pawlett's injury. "He was absolutely fantastic. He was just gliding past people and he created a lot of opportunities in the first 45 minutes.

"They had a real lack of discipline. I was getting really worried for some of my players. There were a few nasty challenges going in."

Ryan Jack also turned in an eye-catching display from midfield and earned high praise from his boss.

"I could talk about Ryan Jack all day," enthused McInnes. "I think he's such an underrated player but not by me and my staff - we think the world of him.

"We think he can add more goals to his game but every one of his team-mates has a real trust in him. He is going on to have a top career, we're lucky to have him."

With Dutch side FC Groningen waiting in the second round, Aberdeen will look to get through next week's trip to Latvia with a minimum of fuss.

"The pitch isn't great over there," said McInnes. "Hopefully, we can get through the game without any injuries. We want to go there and be professional, as we were tonight - I think that is an apt word for our performance.

"It looked easy at times but it was a tie that could have been problematic if we weren't right, if we hadn't had the pre-season we've had, if we hadn't looked after ourselves in the summer.