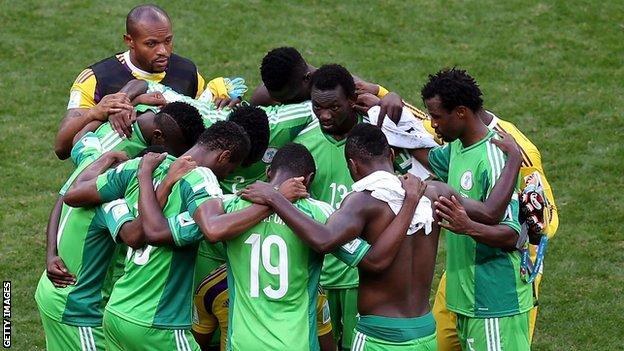 Nigeria could be hit with an international ban by Fifa for government interference in the country's football administration.

Nigeria's government appointed a sole administrator for the Nigeria Football Federation (NFF) on Thursday after a court sacked the executive committee.

Under Fifa rules, national football associations must not be subject to government control.

Nigeria were threatened with a Fifa ban in 2010 after government interference.

The move came after a high court in Jos, Plateau State granted 'an interlocutory injunction' to suspend elected NFF president Aminu Maigari, his executive committee and the NFF congress.

Ehidiame Omorodion, special assistant to the sports minister, said the appointment of a sole administrator was essential while legal proceedings were ongoing.

"The NFF is involved in a court case and this is a temporary appointment pending a court hearing," Omorodion told BBC Sport.

"Ebiakpo Rumson Baribote, the owner of Nigerian top side Nembe City FC, went to court to obtain 'an interlocutory injunction' which prevents NFF boss Aminu Maigari, his executive board and congress of the NFF from managing the affairs of football matters in the country.

"The motion has been granted and the minister had to respect the court by appointing a civil servant to oversee affairs for the time being."

However, world football's governing body Fifa prohibits the use of law court for the resolution of football matters.

Meanwhile, an NFF congress has been called for Friday in Abuja, but not by Maigari, who only returned from the World Cup in Brazil on Friday.

BBC Sport has learned Maigari was arrested by the State Security Service on his arrival in Abuja but later released. The reason behind the arrest remains unclear.

The four-year tenure of Maigari's executive committee will run out at the end of August and elections to the board are slated for Warri, south Nigeria afterwards.

An electoral body has been set up in this respect and forms for candidates have since gone on sale.

African champions Nigeria reached the second round of the World Cup in Brazil for only the third time in their history after they did so in 1994 and 1998.