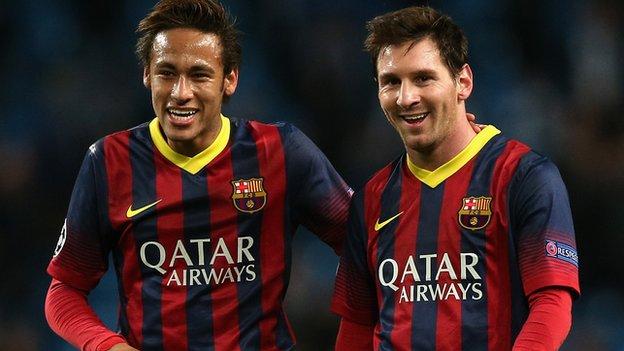 They will train at the Staffordshire base from 28 July to 2 August.

World Cup commitments could impact on who Barcelona bring to the £105m venue, but it could mean stars like Lionel Messi and Neymar training on the pitches often used by England.

Luis Suarez could be a Barca player by then, but his ban for biting looks likely to prevent him from taking part.

The Liverpool and Uruguay striker was suspended for four months from all football-related activity for biting Italy defender Giorgio Chiellini during a match at the 2014 World Cup.

"I am absolutely delighted that FC Barcelona have decided to join us for their pre-season preparations later this month," said St George's Park managing director Julie Harrington.

"This is hugely exciting news for St George's Park and the Football Association, and it is a real pleasure to be able to have one of European football's most successful clubs train at our facility.

"We look forward to welcoming the players and staff, and helping ensure their visit with us is both an enjoyable and memorable experience."

St George's was opened by the Football Association in October 2012.