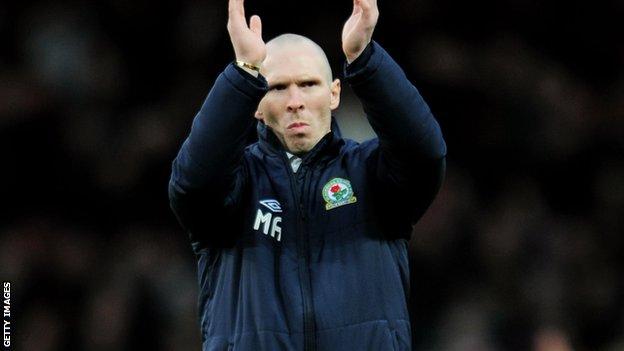 Former Blackburn boss Michael Appleton has been appointed Oxford United head coach after Gary Waddock was sacked as part of an ownership shake-up.

Waddock, 52, only became U's boss in March but was unable to guide the club to the League Two play-offs.

The appointment of Appleton, 38, forms part of a restructuring of the club in which ex-Marussia Formula 1 chairman Darryl Eales becomes joint-owner.

Businessman Ian Lenagan, who has owned Oxford for eight years, will stay on.

In a statement, Lenagan said: "We would like to thank Gary for his effort and contribution through the past months on behalf of Oxford United and to make it clear that this change does not in any way reflect on his performance or capability as head coach."

He added that the new structure bodes well for the club's future ambitions.

Lenagan and Eales, who will become chairman, now each hold more than 30% of the shares in Oxford United Ltd, but both with less than 50%.

Ashton also had a spell as a director with the Baggies at a time when Appleton was with the club as a player.

Having had his playing career cut short by a serious knee injury while at West Brom, Appleton started his coaching career at The Hawthorns and had one match in caretaker charge after Roberto di Matteo was sacked as manager in February 2011.

He took over as boss of Portsmouth in November of that year, but could not prevent them being relegated from the Championship after being docked 10 points for entering administration.

Appleton left Fratton Park for Blackpool in November 2012, only to move on again two months later to become manager of Blackburn Rovers.

Despite leading Blackburn to an FA Cup fifth-round win over Arsenal, he was sacked after only 15 games and 67 days in charge.

Eales' investment follows BBC Radio Oxford reporting last month that the club had been the subject of multiple takeover bids.

A consortium led by local businessman Charlie Methven submitted an offer to buy Oxford but Woodstock-based Lenagan opted for a deal to secure future funding while remaining part of the club.

Lenagan, who also owns rugby league side Wigan Warriors, is believed to have invested nearly £8m in Oxford since taking over the U's.