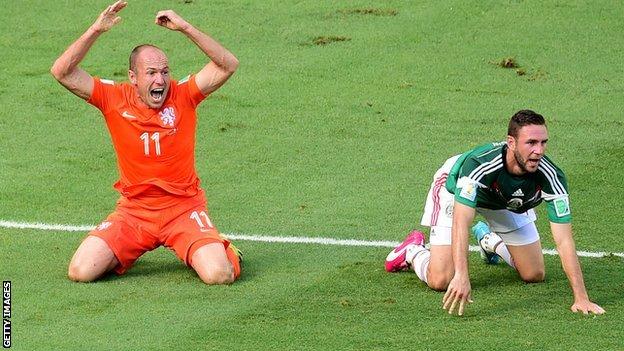 Robben, 30, apologised for diving in the last-16 win over Mexico.

"I would like to ask Fifa and the referees to watch Robben," said Pinto. "We're really worried about his diving. He has admitted doing it."

Asked if Robben should be sent off if he dives, Pinto said: "That may be the most logical solution."

He added: "Maybe he would have to leave the field because he gets two yellow cards for diving."

The Netherlands scored twice in the last three minutes to beat Mexico 2-1 in the last 16 of the 2014 Fifa World Cup, Klaas-Jan Huntelaar scoring the winner from the penalty spot in stoppage time after Robben was fouled by Rafael Marquez.

Robben said: "I have to apologise. In the first half I took a dive. The one at the end was a penalty."

Fifa took no action against Robben because it said no rules were broken.

Ravshan Irmatov of Uzbekistan will referee the last-eight clash at Arena Fonte Nova, the winners of which will meet Argentina or Belgium in the semi-finals.

Netherlands coach Louis van Gaal says his players will not take anything for granted against Costa Rica despite being favourites to progress.

"I am positive there will be no underestimating Costa Rica by my players," Van Gaal said.

"To get as far as they can in this tournament is what they want to achieve. They believe that this is the highest podium in world football and they are seeking to stand on it. They won't be underestimating any opponent."