Gotze demonstrated perfect technique and commendable calm to chest down Andre Schurrle's pass and sweep in a left-foot finish with the prospect of a penalty shootout only seven minutes away.

Argentina, with skipper Lionel Messi looking subdued despite flashes of his talent, could not respond and Germany claimed their first World Cup since they beat the same opponents in Rome 24 years ago.

The success means Joachim Low's side have become the first European team to win the trophy in South America.

Gonzalo Higuain wasted Argentina's best chance in the first half while Germany defender Benedikt Howedes hit the post with a header seconds before half-time.

Germany had to regroup after losing key midfielder Sami Khedira to injury in the warm-up - and his replacement Christoph Kramer to a blow to the head before half-time - but they shrugged off these setbacks to write another triumphant chapter in their sporting history.

Argentina's fans were the vast majority of a crowd that created a vibrant atmosphere inside the Maracana - although Germany were well represented and had the support of many yellow-clad Brazil supporters who still turned up despite seeing their hopes of watching the hosts in the World Cup final dashed by that stunning semi-final beating at the hands of Germany.

German supporters stayed in their places more than an hour after the final whistle as the victorious side indulged in lengthy celebrations of a win that vindicated the rebuilding plan put in place when they suffered the humiliation of going out of Euro 2004 at the group stage, which resulted in then coach Rudi Voller's resignation.

Germany had reached the semi-finals of the previous two World Cups but have now managed the crowning achievement for coach Low, who not only brought the trophy back to Germany, but also ended Europe's grim record in this tournament on South American soil.

Argentina failed to have a shot on target in the entire game and four-time world player of the year Messi looked an increasingly jaded figure as the game went on.

The Barcelona star never stopped striving to carry his team over the line in the manner achieved by his great predecessor Diego Maradona, who inspired them to their last World Cup when they beat Germany in Mexico City in 1986. 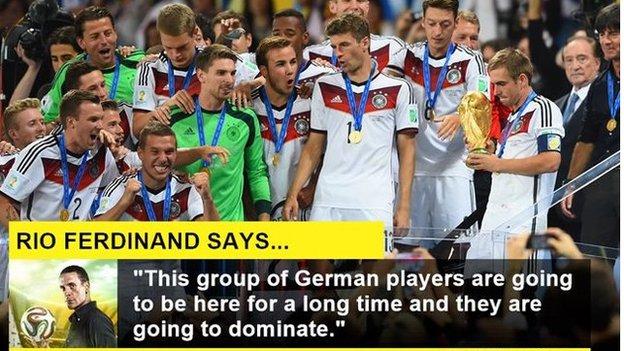 After destroying hosts Brazil 7-1 in Tuesday's semi-final in Belo Horizonte, this was a game that required different qualities such as resilience and concentration - but Germany were never found wanting and their ecstatic celebrations at the end were in contrast to the tears of the Argentines.

And ominously, 22-year-old match-winner Gotze symbolises the next generation of Germany players that coach Low declared would dominate for years to come when he addressed the media 24 hours before this final.

For now, though, they have another World Cup to celebrate and while it may not have been the extravaganza many hoped would crown this thrilling tournament, Germany are worthy winners.

Argentina, with Messi's speed and sleight of foot posing problems for the previously untroubled Hummels in the early phases, had the game's first big opportunity courtesy of Kroos' error.

The Bayern Munich midfielder delivered a misplaced header that sent Higuain clear on goal but the striker did not live up to his elevated reputation with a horrible miscued finish that did not trouble Neuer.

Higuain had the ball in the net soon after from Ezequiel Lavezzi's cross but he was clearly offside - although his prolonged celebration suggested he thought differently.

As Argentina continued to trouble the German defence, it needed a crucial clearance from Jerome Boateng on the goalline as Messi pulled the ball back for his inrushing colleagues.

It was not all Argentina though, and keeper Sergio Romero made a fine save from substitute Schurrle - on for Kramer - a stop made even better as Ozil ducked right in front of the unsighted keeper as the shot came in.

The closest either side came to a goal was right on half-time, when Howedes crashed Kroos' corner against the post with Romero beaten.

Messi had been threatening and he almost put Argentina ahead seconds after the break, only to pull a poor finish across goal with his normally lethal left foot.

As the final entered the closing 10 minutes, Kroos had Germany's clearest opening for some time but he sent a sidefoot finish off target after Ozil had laid the ball invitingly into his path.

So it was extra time, and while Argentina's Rodrigo Palacio was off target when he lofted a finish over Neuer, Gotze showed class and composure to decide an increasingly attritional game with the final flourish of quality this Fifa World Cup in Brazil fully deserved as its conclusion.