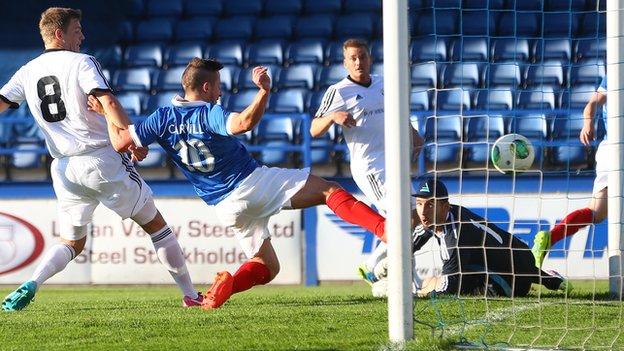 Linfield are through to the second qualifying round of the Europa League after a 1-1 draw with B36 Tórshavn at Mourneview Park on Thursday night.

Michael Carvill, who scored in the 2-1 first leg victory in the Faroe Islands, put the Blues into a 19th-minute lead with a close-range finish.

Tórshavn equalised through a penalty by Adeshina Lawal who had been brought down by home keeper Jonathan Tuffey.

Tórshavn mounted late pressure but Linfield hung on to progress.

The Irish Premiership runners-up now face AIK Solna of Stockholm in the second qualifying round.

After their first leg victory, Warren Feeney's men were favourites to progress.

But, in the end, it was a nervy victory as Tórshavn sought the second goal which would have taken the match to extra-time.

Tuffey was called on to make a couple of early saves - from Lawal and Lukasz Cieslewicz - while home striker Andrew Waterworth shot into the side-netting.

The Linfield goal came from an Aaron Burns cross-cum-shot, with Carvill swooping to score from just a yard out.

Ivan Sproule then fired straight at keeper Tórdur Thomsen while Waterworth hit the near post with a shot just before half-time.

Tórshavn got level three minutes into the second half when keeper Tuffey brought down Lawal who rifled the penalty straight down the middle.

Rogvi Poulsen just failed to get a scoring touch on a dangerous cross while Lawal had a shot blocked.