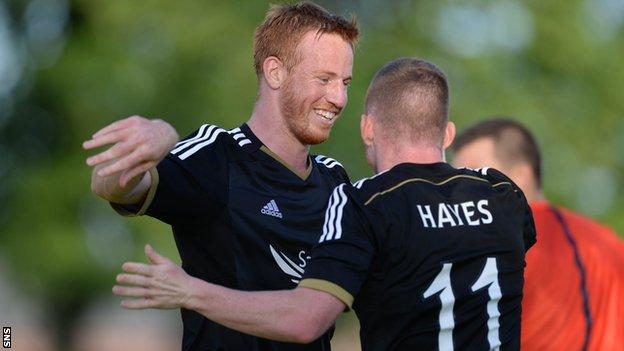 The Dons continued from where they left off last week, and Rooney flicked home Jonny Hayes' cross before adding two more before half-time.

Derek McInnes' men understandably took their foot off the gas in the second half leading 8-0 on aggregate.

They will face a tougher test when Dutch side FC Groningen visit Pittodrie in qualifying round two next week.

Aberdeen went into the game knowing the tie was effectively safe after a resounding 5-0 victory in the first leg at Pittodrie.

They had Peter Pawlett missing though through an injury suffered in that first game, and summer signing Ashton Taylor started at left-back.

The hosts started brightly with Emils Knapsis and Mantas Savenas firing over, however the Dons soon got into their stride and Niall McGinn went close after a good knockdown from Rooney.

After Rooney had opened the scoring, Jamie Langfield was called into action with Knapsis testing the goalkeeper before Shay Logan fired wide at the other end.

Rooney made it 2-0 when Logan's cross was missed by Janis Krumins and the Irishman was left with a tap-in.

He netted again to complete his hat-trick when he met Hayes' ball at the back post.

Hayes was having a good game for the Dons but went off injured just after the hour mark with Cammy Smith coming on and it was a quiet second half as Aberdeen played out the game.