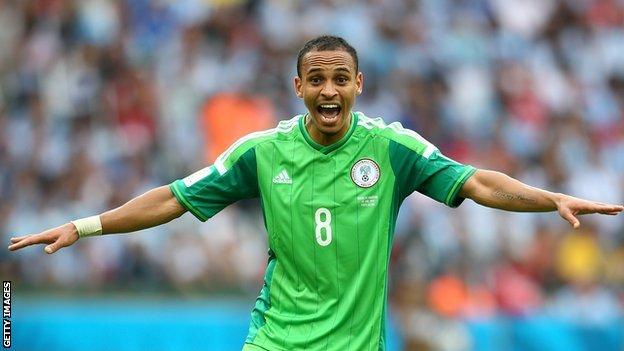 Peter Odemwingie is considering his international future after Nigeria's second round exit at the World Cup.

Odemwingie scored the only goal as Nigeria beat Bosnia-Hercegovina in a Group F game.

But the 32-year-old says that the loss to France on 30 June, his 67th cap, could be his final Nigeria appearance.

"Sometimes you just feel like you've come a circle and I don't know whether I'll play on for Nigeria," he told BBC Sport.

It's not a decision I will rush into but then, you need to make an honest one.

"I am committed to the country's cause. Right now I'm not too sure. It might be but it might not.

"You need to be honest with yourself and your country. There are few people I need to talk to because I can't be selfish.

"Nigeria has always meant everything to me. Despite everything I've been through, wearing the national colours has definitely been one the highlights of my career."

After a goal-scoring debut against Kenya in Lagos in 2002, he has been widely regarded as one of the most committed and dedicated players to have represented his country.

As well as winning silver medal at the 2008 Olympic Games, he was part of the Nigeria squad that finished in third place at the 2004, 2006 and 2010 Africa Cup of Nations.

However, he was omitted from the Super Eagles squad that won won the continental title in 2013.

His omission led to a public spat with coach Stephen Keshi, he was subsequently banished to the international wilderness, but was recalled to play at this year's World Cup.

"It's one of those things [missing the team' successful campaign] you look back on and learn from without holding any regrets," he added.

"I'm imperfect and I've learned so much playing international football," he added.

"There are many young players coming through now and you can only pass on your experience.

"It's not a decision I will rush into but then, you need to make an honest one.

"But we shall see in the next couple of weeks."

If he retires, Odemwingie will join captain Joseph Yobo, who has retired from international football after making 100 appearances for his country.

Another experienced player, goalkeeper Vincent Enyeama, has also hinted that he is considering retirement from international football.