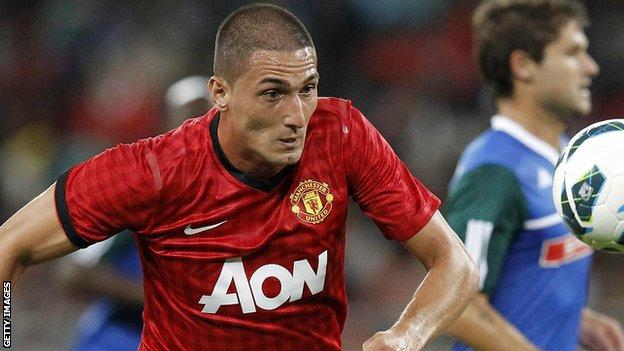 New Cardiff City signing Federico Macheda says his new side are not favourites for the Championship title.

The Italian striker, 22, joined the Bluebirds after his contract expired in July.

Cardiff will bid to return to the Premier League after relegation.

"I don't say that we're the favourite because there are lots of good teams, but I am sure that we will be up there," said Macheda.

"The Championship is a very tough league - there are lots of good teams. But we've got a good team too.

"We have to work all season for the promotion."

Macheda had a good record while on loan in the Championship at Birmingham last season, scoring 10 goals in 18 appearances.

Cardiff manager Ole Gunnar Solskjaer coached Macheda in the reserve side at Manchester United, and the Italian says being reunited with Solskjaer was "the main thing" that made him join the Bluebirds.

"I really can't wait to start the season and thank him for bringing me to Cardiff," said Macheda.

"My target is to do well for the team.

"Of course I will score as many goals as I can and play regularly - that's my target for this season.

"I'd love the team to get promoted straight away.

"We know we have to do well for the fans and ourselves and the benefit of the club.

"I know the fans expect a lot from us and we will do everything to make them happy."

Cardiff's first season in the Premier League ended in relegation.

Since then Norwegian boss Solskjaer has signed Macheda along with fellow front men Javi Guerra, and Adam Le Fondre.

Solskjaer has also signed Austrian midfielder Guido Burgstaller from Rapid Vienna and Kagisho Dikgacoi on a free from Crystal Palace.

But the Bluebirds manager was unhappy at the fitness levels of "two or three players" on their post-holiday returns to training.