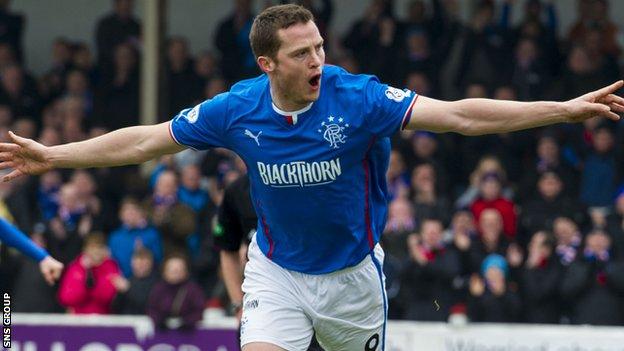 Jon Daly will miss the start of the new campaign for Rangers as the striker recovers from a knee operation.

The 31-year-old Irishman is expected to be out for six weeks, with the cartilage problem flaring up during pre-season training.

Daly was the club's top scorer with 21 goals last term as Rangers went unbeaten to win League One.

"It's a real shame," manager Ally McCoist told the club website. "Big Jon was fantastic for us last year."

Rangers have recruited experienced forwards Kris Boyd and Kenny Miller this summer, while Nicky Clark and Dean Shiels are other attacking options for McCoist.

Daly had a series of problems with his right knee during his six-and-a-half years with Dundee United but was able to make 38 appearances in his debut season for the Ibrox side.

"Towards the end of the season, we would have given him a little rest if we could have but personnel indicated we couldn't," explained McCoist.

"With Andy Little injured, he was our only striker at points and to be fair to him, he kept turning up and playing for us.

"He was playing through a little bit of pain then had a good rest in the close season but there is still a little niggle there.

"We sent Jon for a scan and that showed he has a problem with his cartilage so he has gone back to the same surgeon who did his other knee.

"It looks as though he will be out for six weeks and it's a blow for the team. It's obviously blow for him too but the bottom line is he has to get it sorted as quickly as possible."

Meanwhile, the Petrofac Training Cup first-round tie between Rangers and Hibs at Ibrox has been rescheduled for Tuesday 5 August and will be shown live on BBC Alba.