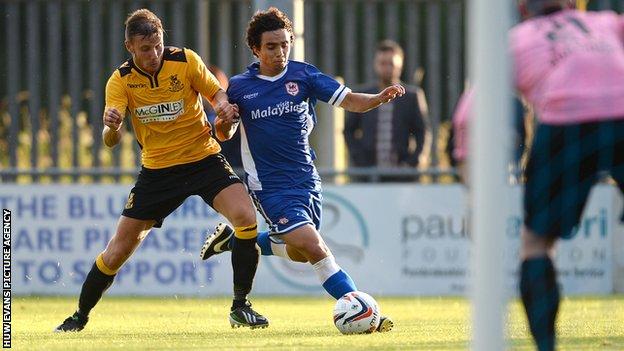 Cardiff City defender Fabio Da Silva hopes the Bluebirds can bounce back to the Premier League at the first attempt.

The Welsh club are preparing for life in the Championship after being relegated from the top flight.

The Brazilian played in Cardiff's first friendly of the pre-season on Monday 7 July and says the squad is committed to gaining promotion.

"I believe in the plan they have for our future here," said Da Silva.

"Everyone in the team wants us to bounce back and I really hope we will bounce back this season," said Fabio.

Solskjaer has done a lot of business early in pre-season as the Bluebirds aim for promotion, signing five players so far.

after his contract expired, along with fellow front men Javi Guerra and Adam Le Fondre.

Austrian midfielder Guido Burgstaller from Rapid Vienna and Kagisho Dikgacoi on a free from Crystal Palace, have also been added.

But the Bluebirds manager was unhappy at the fitness levels of "two or three players" on their post-holiday returns to training.

Da Silva, who featured in Cardiff's 3-0 victory against Welsh Premier side Carmarthen Town, said he has been working hard on his holidays to return in shape for pre-season.

The 24-year-old said he has been playing football on the beaches of Rio with friends, to get in shape during his time off.

"When I'm back home in Brazil I always play [football] with friends," said Da Silva.

"I still keep on working so I feel great.

"Every game I have to impress the manager and work hard every day because that's what pre-season is about, working hard to be fit for the season."