The five-time winners were thrashed by a German side who were 5-0 up in the first 29 minutes. 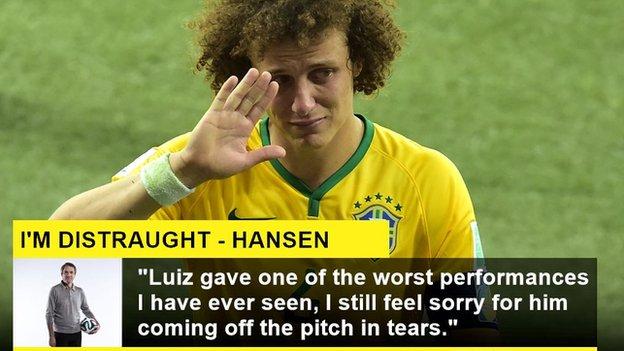 "They were better than us," said Luiz, who captained Brazil in the absence of Thiago Silva. "It's a very sad day but it's also a day from which to learn.

"Apologies to all the Brazilian people. I just wanted to see my people smile."

Brazil goalkeeper Julio Cesar described his team's collapse as a "blackout" and the defeat as "inexplicable".

The 34-year-old, who is on loan at Toronto from QPR, said: "It was beautiful up to here.

"I thank the Brazilian people, and the fans are to be congratulated for all the support they gave us.

"The players are going to apologise, but Germany were strong, and we have to acknowledge that."

Luiz, who moved from Chelsea to Paris St-Germain in a transfer reportedly worth £40m earlier this summer, was to blame for the vital first goal, when he failed to track Thomas Muller before the German scored from a corner.

BBC Match of the Day pundit Alan Hansen, a three-time European Cup winner with Liverpool, described Luiz's performance as "one of the worst I have ever seen".

"I will be remembered as the coach to lose 7-1 but I knew that risk when I took the job," said Scolari, a World Cup winner with Brazil in 2002.

"The person who decided the line-up, the tactics, was me. It was my choice."