The hosts were 5-0 down by half-time in Belo Horizonte as Germany reached the final in emphatic style.

"I will be remembered as the coach to lose 7-1 but I knew that risk when I took the job," said Scolari, who guided Brazil to the 2002 World Cup trophy.

"The person who decided the line-up, the tactics, was me. It was my choice."

Scolari described the result, which surpassed the 3-0 defeat by France in the 1998 final as Brazil's heaviest World Cup loss, as "catastrophic".

"My message for the Brazilian people is please excuse us for this performance," added the former Chelsea manager. 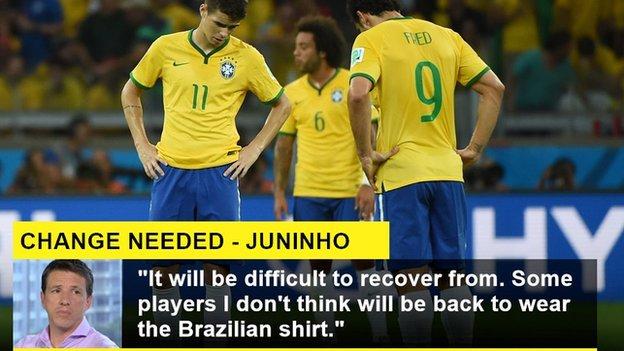 "I'm sorry that we weren't able to get to the final and we're going to try to win the third-place match. We still have something to play for."

Brazil, the first team to concede seven goals in a World Cup semi-final, will play either Netherlands or Argentina in Brasilia on Saturday.

Scolari has suffered a notable defeat before, when his Portugal side were unexpectedly beaten on home soil by Greece in the final of Euro 2004.

Brazil were unbeaten in 14 games ahead of the meeting with Germany and Scolari played down the absence of striker Neymar, who fractured a vertebra during the quarter-final victory over Colombia.

He said: "Let's not try to find an excuse in Neymar."

Thomas Muller's opener was the first of five goals in 18 first-half minutes, with strikes from Miroslav Klose and Sami Khedira sandwiching a Toni Kroos double.

Scolari, who also had captain Thiago Silva suspended for the match, said: "We did our best - but we came up against a great German team.

"We couldn't react to going behind. Not even the Germans can tell you how this happened - but it's because of their skills and you have to respect that."