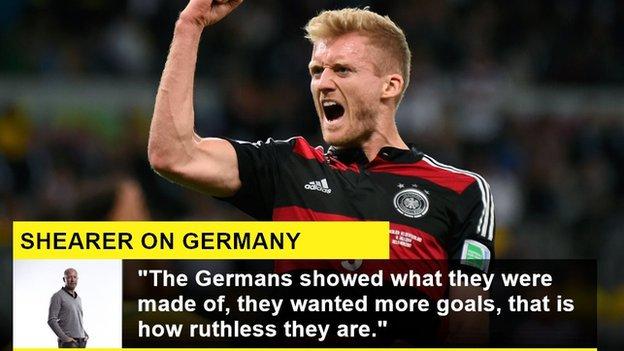 The three-time winners scored on five occasions in the first half - including four in six minutes - as they inflicted Brazil's biggest World Cup loss.

"Scoring three in four minutes the hosts were in shock," said Low.

"We were extremely cool and realised they were cracking up, and we took advantage of that."

Low, whose Germany side lost 1-0 to Spain in the 2010 semi-final, added: "We had a clear, persistent game-plan and if we were courageous and believed in our own strengths, we would win this match.

"That the result would be so emphatic was not to be expected."

Low then turned his attention to Sunday's final, where Germany will either meet either Argentina or Netherlands, who play each other on Wednesday.

"We've won this match. We're in the final of the World Cup, against a different opponent," he said.

"We were lucky that the hosts were shell-shocked. Now we must prepare well for the final."

"We can't run away with ourselves," said the 24-year-old, who opened the scoring in the 11th minute, before Miroslav Klose struck to become the World Cup's all-time leading scorer.

"Just as it was said that we were finished after the Algeria game, now we'll be praised to the heavens. We haven't reached our goal yet."

Muller called for his team-mates to put their "heart and soul" into one more game - the World Cup final on Sunday.

"Of course, we didn't expect that score," he said. "But you can see how different games can go.

"Brazil reacted differently and moved forward fast when they won the ball, which left more space than you get against defence-minded teams.

"We used that until the middle of the first half and, at some point, the opponent has to break."