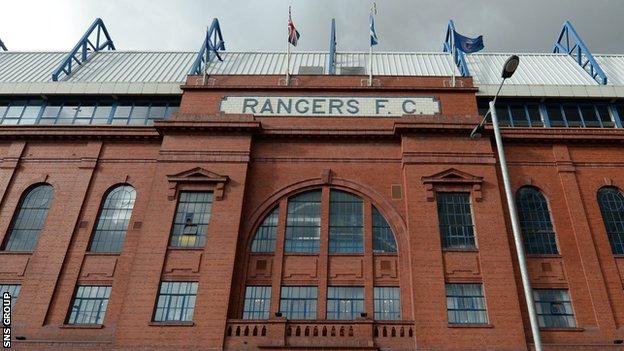 The events that led to the financial collapse of Rangers Football Club plc cannot be undone, but they are still under challenge.

The decision of the High Court judge Lord Doherty to dismiss Her Majesty's Revenue and Customs' appeal against the verdict of what became widely known as the "Big Tax Case" is important in terms of perception, but also of grievance.

The use of Employee Benefit Trusts by Murray International Holdings was a means to reduce tax liabilities.

It could be argued that the inherent riskiness of the scheme - which was used by Rangers, as the club was part of MIH at the time, but also several other football teams in England - meant that the group might have had cause to set aside funds in case of future challenges by the authorities.

Nonetheless, riskiness alone is not a reason for prosecution. The potential liability of the big tax case - £24m before any additional interest and penalties - was a burden to Rangers, because it put off potential buyers of the club and it influenced wider opinion.

The latter is a particular cause of anger amongst the Rangers fans, who feel the club was vilified.

Some potential buyers wanted to take control of Rangers as long as MIH retained liability for any potential tax bill, but no agreement could be reached. This, in turn, eventually left the opening for Craig Whyte to appear on the scene and buy the majority shareholding from Sir David Murray for £1.

A chain of events ensued, but the potential liability of the tax case remained a central issue.

HMRC could yet appeal the Upper Tier Tribunal decision of Lord Doherty, and the revenue intend to take time to digest the judgement in full before deciding how to proceed.

The Murray Group is taking a similar stance, although they did release a statement which recorded their satisfaction at the result, their wish for the relevant authorities to pursue individuals, and their sense that some coverage of the issue contained "fundamental misunderstandings".

The Big Tax Case became shorthand for portraying a culture of arrogant disregard at Ibrox.

The risk of the scheme cannot be discounted, and Rangers ultimately suffered because of the potential liability of that risk, but unless the UTT judgement is overturned then the tax scheme has been ruled legal.

Other questions are valid, such as how tax documents relating to the case were leaked, and why HMRC allowed Whyte to avoid paying PAYE for nine months before eventually prompting him to put Rangers Football Club plc into administration in February 2012.

Clubs in England used EBTs, but Rangers were the first to be pursued through the courts in this way.

Even without the potential big tax case liability, HMRC held a high enough percentage of the overall debt to reject the Company Voluntary Arrangement offer made to creditors in May 2012.

Other challenges are currently being made, though, and if BDO, the liquidators of RFCplc, are successful in their court action against the law firm Collyer Bristow, there might yet be a further change of perception.

Collyer Bristow were the firm of the lawyer Gary Withey who worked on Whyte's takeover, which turned out to have been funded by money borrowed from Ticketus against the future sales of Rangers season tickets. Collyer Bristow are being pursued for £24m, which would be added to the creditors' pot, but a victory for BDO would cast further light on the events of Whyte's takeover.

Police investigations are ongoing, and widely considered to be approaching an outcome.

The mood of Rangers fans, amongst others, is that the club has been the victim of a potentially fraudulent transaction. Shareholders of RFCplc could then, in theory, launch claims of their own to try to recoup funds. Ticketus, meanwhile, continue to pursue Whyte through the courts for £17m, with the former owner having lost his final route of appeal.

There is no impact on Rangers International Football club, the plc that owns the football team, but for supporters, and shareholders in RFCplc, the nature of the events that led to Whyte owning the club and then sending it into administration because of the non-payment of PAYE is critical.

Lord Doherty's verdict emphasises that while the risk of the EBT scheme cannot be discounted as a contributory factor, it should not have been so widely assumed that HMRC's view would be upheld. Even now, the decision is not final, unless the revenue choose not to pursue it further.

Ultimately, so much of the detail of the events that led to the collapse of RFCplc are still unknown. The story has not, yet, fully been told or understood. More will inevitably be revealed in the coming months.