Defender Ron Vlaar stepped up but Sergio Romero - a player who was "taught how to stop penalties" by Van Gaal at AZ Alkmaar - saved his kick.

Argentina won the shootout 4-2 and will face Germany in Sunday's final.

"I thought he was the best player on the pitch so should have confidence."

Van Gaal was also left to rue the intervention of goalkeeper Romero, who he signed for AZ from Buenos Aires-based Racing Club in 2007.

The Argentine spent two years working under Van Gaal before the 62-year-old departed for Bayern Munich.

"I taught Romero how to stop penalties, so that hurts," Van Gaal said. "We were the club to bring him to Europe.

"He was a big talent, and someone who has the qualities to do that."

Romero sought out his former manager at the end of the match.

"I went to the dressing room to thank him," he said. "He is someone who helped me a lot when I arrived in the Netherlands, in a completely different country, with different customs.

"At the beginning I didn't speak a word, and he spoke Spanish and he helped me a lot."

The last-four tie in Sao Paulo was decided by penalties following a goalless draw where both sides barely threatened in an uninspiring 120 minutes.

The Dutch scored all four of their spot-kicks to beat Costa Rica in the quarter-final shootout when captain Robin van Persie converted their first effort.

But with the Manchester United striker substituted in extra-time, Van Gaal was forced to turn to Aston Villa centre-back Vlaar.

His low effort was stopped by Romero, who then denied Wesley Sneijder as the Dutch missed two of their four penalties.

"It just goes to show it's not easy scoring in a shootout," said Van Gaal. "It's the most terrible scenario, to lose on penalties. At the very least we were equal with them, if not the better team. It's a big disappointment.

"Winning on penalties in your previous match should give you confidence. We took those penalties in an incredible way against Costa Rica,"

Van Gaal's side now face Brazil in Saturday's third-place play-off in Brasilia but the Dutchman said: "In a tournament you shouldn't have players play a match for third or fourth place.

"There's only one award that counts, and that's being world champion."

Against Costa Rica, Van Gaal brought on substitute goalkeeper Tim Krul in place of Jasper Cillessen for the shootout - a tactic which worked as Krul saved two spot-kicks.

But he was unable to call on the Newcastle player again, having already made his three substitutions after withdrawing Van Persie in favour of Klaas-Jan Huntelaar.

"If I had had the opportunity to substitute Jasper I would have done that but I had already used three substitutes so I couldn't," Van Gaal said.

"I thought it was necessary to get Van Persie out because he was on his last legs. My feeling was that Huntelaar would make the goal." 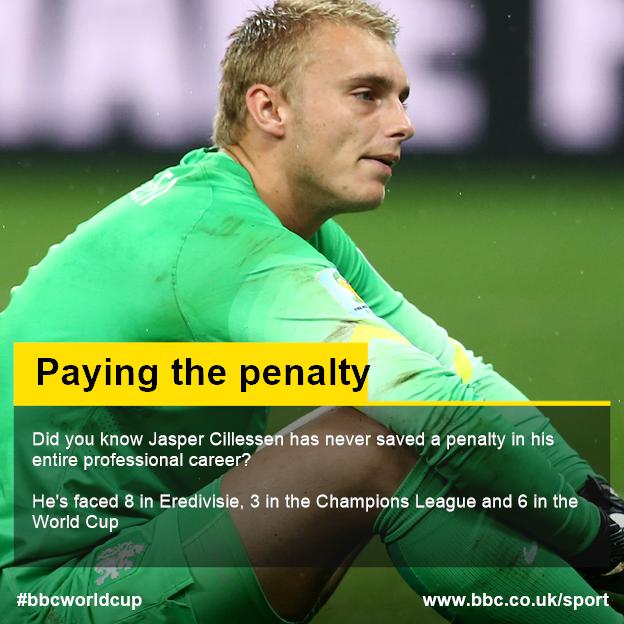