BBC Sport has taken a look at the expected formations, line-ups and pen pics of each player likely to start, as well as the coaches. 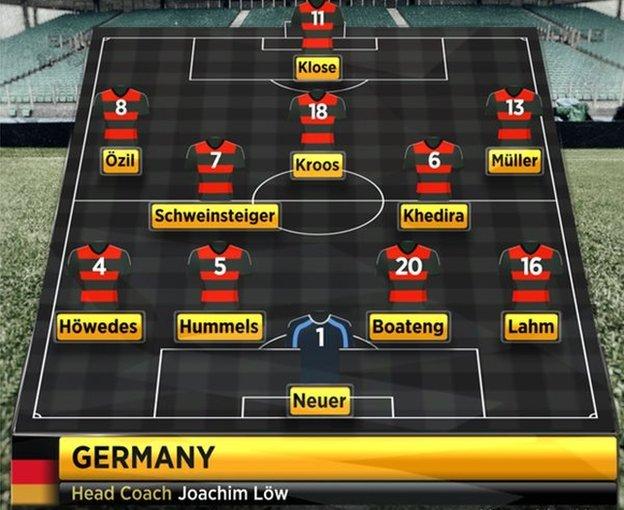 This tournament has helped Manuel Neuer cement his reputation as the world's number one goalkeeper.

An expert at the 'sweeper keeper' role because of his ability on the ball and willingness to come out of his area to clear any danger, he recorded an incredible 21 touches outside his 18-yard box against Algeria.

Remarkably, he has lost only three times in 51 appearances from Germany since his 2009 debut.

Did you know? Only Costa Rica's Keylor Navas (91.3%) has registered a better save percentage than Neuer in this World Cup (85.2%).

Described by club coach Pep Guardiola as "the most intelligent player I've coached", the experiment at this World Cup of copying his switch from right-back to a deep-lying defensive midfield role like he has done at Bayern Munich was not a disaster by any means, but Germany have looked more solid in defence and fluid in attack since he returned to full-back for the quarter-finals. The final will be his 20th World Cup appearance for Germany.

Did you know? No player has attempted more short passes than Lahm at this World Cup (450).

He started the tournament at right-back but has moved into the centre of defence because of a combination of injuries and Lahm's switch back to defence. He picked up two injuries earlier in the tournament, but is one of the first names on Joachim Low's team-sheet. He faced his half-brother, Kevin-Prince of Ghana, in the group stages for the second successive World Cup.

Did you know? He has started in each of Germany's last 11 World Cup games.

Not assured of a starting spot in central defence before the start of the World Cup, he is a contender for the team of the tournament thanks to a series of powerful displays at centre-back. Offensively, the Borussia Dortmund man has also been a key weapon, having scored two towering headers against Portugal and France. All this while battling off a nasty bout of flu.

Did you know? His mother was the first female to commentate on a football match on German TV.

A centre-back at club side Schalke, he has helped fill Germany's troublesome left-back spot with aplomb. Very much a squad player prior to this tournament, he has started every game in Brazil as coach Low started with four centre-halves across the back four. Just before the World Cup began he was in a car accident at a Mercedes event involving F1 driver Nico Rosberg, but emerged unscathed.

Did you know? Howedes has made more tackles than any other Germany player during this World Cup (15).

But anyone who doubted Joachim Low's faith that the Real Madrid midfielder could last the tournament were made to look silly by his brilliant performance against Brazil.

Since he has been restored alongside Bastian Schweinsteiger, his midfield partner in crime from the 2010 World Cup, in time for the quarter-finals, Germany have looked a more solid and dangerous side.

Did you know? Khedira recorded an assist and goal in a World Cup match for the first time against Brazil.

After an injury-plagued season for Bayern Munich, he picked up a knee problem at a pre-World Cup training camp to further disrupt his preparations for this tournament. Coach Joachim Low left him out of the starting line-up for the first two matches, but Germany's vice-captain has returned to the side and bossed proceedings from central midfield in the extraordinary win over Brazil.

Debate may rage over Muller's best position, but whether he plays as a 'false nine', a central striker or a right-sided attacker, he will always score goals.

The 24-year-old is within reach of a remarkable second consecutive Golden Shoe award, helped hugely by his hat-trick in the opening game against Portugal.

He is already only the third player in history after Teofilo Cubillas and team-mate Miroslav Klose to score five or more goals in two different World Cups.

Did you know? Muller has scored 10 goals and provided six assists in just 12 World Cup matches.

Often underrated for the quiet and efficient way he gets the German and Bayern Munich midfields ticking over, his performances at this tournament have brought him firmly to the fore.

His brace against Brazil were his first World Cup goals and came in a dazzling man-of-the-match performance.

He has played in all but two minutes of Germany's six matches so far and looks certain to be named in the team of the tournament.

Did you know? Kroos has had more touches than any other player in this World Cup (606) including an incredible 135 against Algeria.

Arsenal's record signing has not exactly been an overwhelming success in Brazil, with many back in Germany such as Paul Breitner arguing that he should be dropped. Spurning a good late chance to make it 8-0 against Brazil has probably not helped. He took to Twitter after the 7-1 semi-final win to say that he hoped the scoreline had not destroyed Brazil's pride. Doubt it.

Did you know? No Germany player has created more chances for his team-mates at this tournament than Ozil (15).

It was written in the stars that Klose would secure the mantle as the World Cup's all-time record scorer from Brazil's Ronaldo, against the Brazilians, in Brazil.

When he scored with a typical close-range finish in the semi-final against the hosts it gave him his 16th World Cup goal.

Germany's leading goalscorer with 71 goals in 136 games, he is the third player to net at four World Cups and Germany have never lost a game in which he has scored.

Did you know? He has played in 23 World Cup matches which puts him second on the all-time list with Paolo Maldini, behind compatriot Lothar Matthaus on 25.

He may have been unspectacular as a player, but Jurgen Klinsmann's former assistant has helped oversee Germany's transition from efficient (read boring) to one of the most entertaining national teams on the planet. However, after losing in the semi-finals or final of the past three tournaments, the pressure might be on if he returns empty-handed again. 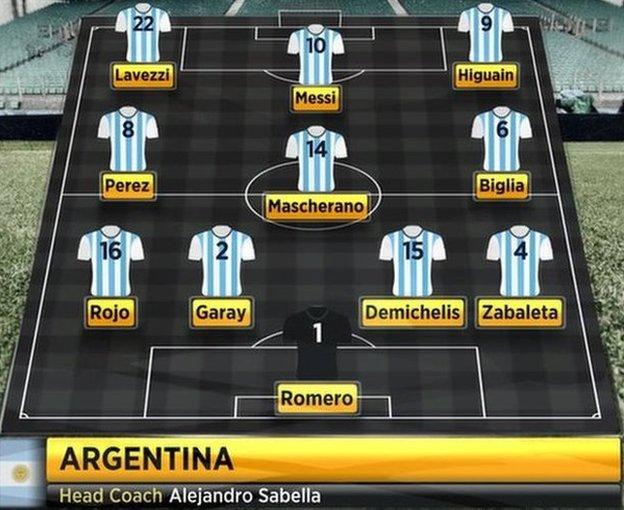 Goalkeeper was seen as a problem position for Argentina going into the tournament.

After all, Romero made only a handful of appearances on loan for Monaco last season.

Worry not, the 27-year-old has conceded just three goals in six games in Brazil and saved twice as his team reached the final with a penalty shootout victory over the Netherlands.

Did you know? Romero is the first Argentina goalkeeper to keep four clean sheets at a World Cup tournament.

The popular Manchester City right-back missed out on the 2010 World Cup but he has been a key player in defence for Argentina in Brazil. The 29-year-old posted a selfie of himself after the semi-final victory on Wednesday wearing a blue wig and a bandage covering a facial cut sustained after an accidental collision with Dirk Kuyt.

Did you know? Zabaleta has made more passes in the final third at this World Cup than any other Argentina defender (64).

Another Manchester City player gearing up for a World Cup final appearance, the 33-year-old did not figure at all during the group stage of the competition or the round of 16 victory over Switzerland. He started the last two games alongside Ezequiel Garay and looks considerably different to what most Premier League fans might recall having had his ponytail cut off.

Did you know? Demichelis made eight interceptions against the Netherlands, five more than any other player for Argentina.

Close to joining Manchester United last summer, Garay caught the eye in the semi-final against the Dutch when he made a thumping clearance while holding one of his boots in his hands. Like Zabaleta, he also took a blow to the head against the Dutch, this time in a collision with fellow defender Ron Vlaar.

The Sporting Lisbon defender played for coach Alejandro Sabella at Estudientes back in Argentina. He has been linked with both Liverpool and Chelsea and was on the scoresheet in Brazil when he scored the winner in the group game against Nigeria, converting a free-kick with his knee.

Did you know? Rojo has made more tackles than any other Argentina defender (17), as well as creating the most chances from the back (7).

Very different in style to skipper Lionel Messi but arguably just as crucial to his team, his importance was encapsulated by a brilliant last-ditch block to prevent Arjen Robben from scoring during Wednesday's semi-final. The former Liverpool man, who was his team's skipper in South Africa in 2010, is the shield in midfield - despite playing at the back for Barcelona.

Did you know? Javier Mascherano has attempted a competition-high 509 passes so far. He has also made the most tackles so far - 28.

The 28-year-old, who plays for Lazio in Italy, had to be content with a bit-part role for his team's first four games of the tournament, coming off the bench in each fixture. But the midfielder has started the last two fixtures and is set to figure on the right of a midfield three in Sunday's final.

Did you know? Lucas Biglia completed 90% of his passes against the Netherlands, the highest rate of any Argentina midfielder to attempt more than three passes.

Industrious and hard-working, the Benfica midfielder is yet another player at the World Cup to find himself linked with Manchester United. The injury to the unfortunate Angel Di Maria gave Perez the chance to start against the Dutch and he did not disappoint. He was the player of the year in Portugal last season.

Did you know? Enzo Perez has completed 90 minutes just once in his 10 appearances for Argentina (v Slovenia).

Nicknamed Pipita, the Napoli striker scored the only hat-trick at the 2010 World Cup and was third behind Messi and Luis Suarez in terms of goals scored in South American qualifying.

Came off the bench in the opening game against Bosnia-Hercegovina and provided an assist for Messi's winning goal.

Scored the only goal of the game in the nervy quarter-final victory over Belgium.

He also netted twice against Nigeria as the Barcelona forward showed signs that he would cement his claim to be the world's best player with a dominant World Cup.

But the 27-year-old was a largely peripheral figure against the Dutch and it has been questioned whether he is running out of steam.

Did you know? Lionel Messi has created 21 chances for his teammates, more than any other player at the World Cup.

Did you know? Lavezzi has fired in just two shots at this World Cup, fewer than any other Argentina forward.

Once of Sheffield United and Leeds United, Sabella cuts a very different figure on the touchline to predecessor Diego Maradona.

He might look like a touch schoolmasterly but the 59-year-old has been a steady figure in Brazil and his willingness to build his team around the talents of Messi has seen them progress to Sunday's final.