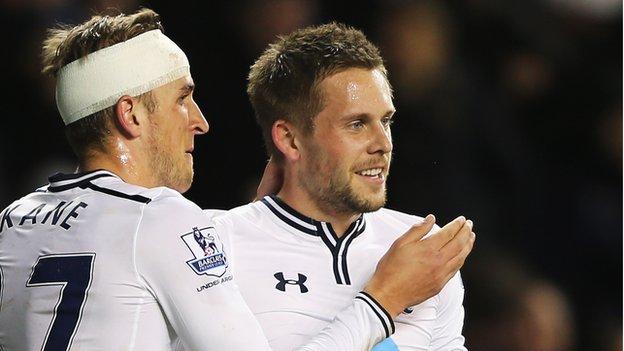 Huw Jenkins has confirmed midfielder Gylfi Sigurdsson's return to Swansea City was discussed as part of a deal that could see defender Ben Davies go to Tottenham Hotspur.

But chairman Jenkins has dismissed reports Liverpool have been in contact about Wales full-back Davies.

"There has been no firm interest or call off Liverpool [over Davies]," said Jenkins.

He also told BBC Wales they have had no enquiries for striker Wilfried Bony.

After scoring seven times in 19 games under then-Swansea manager Brendan Rodgers, the Iceland international joined Spurs on a permanent deal.

Davies has played 71 senior games for the Swans and is the first choice for Wales at left-back.

Welsh-speaking Davies hit the limelight at Liberty Stadium during the 2012-13 season following an injury to fellow international Neil Taylor.

Davies, who has risen from the youth ranks at Swansea, made his debut for the club as a 19-year-old in August 2012 and quickly established himself as first-choice left-back when Taylor suffered a long-term injury.

His performances impressed Wales manager Chris Coleman, who handed the Neath-born player an international debut in the 2-1 win over Scotland in October 2012.

Bony's agent has said the Ivory Coast striker would only leave Swansea this summer for a top-six club.

The 25-year-old was the Welsh club's top-scorer last season with 25 goals following his record £12m move from Vitesse Arnhem.

He also became the first player at any Welsh club to score at a World Cup finals since Ivor Allchurch in 1958.

Bony scored Ivory Coast's first goal as they came back to beat Japan 2-1 in their Group C opener in Brazil.

Arsenal, Liverpool, Everton and Borussia Dortmund are among the clubs who have been linked with him, but in May Bony said he would be happy to see out the remaining three years of his contract with the Welsh club.