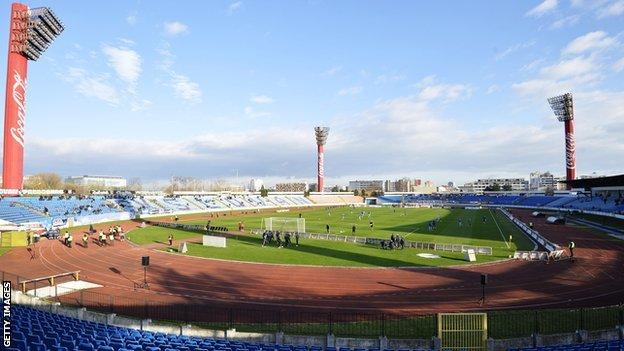 Count up the number of replica football shirts walking through Oswestry town centre this weekend and there will be a lot more sporting the colours of Manchester United than The New Saints.

Yet the Saints can offer something this season that Old Trafford cannot: Champions League football

Admittedly it will not actually be in Oswestry where they will host Slovan Bratislava, one of the bigger names of European football, in the Champions League second qualifying round tie on Tuesday 22 July.

Due to concerns over the quality of the pitch at their Park Hall home in Oswestry, and with Wrexham's Racecourse Ground being unavailable, TNS will have to decamp 55 miles away to the North Wales coast, to the Corbett Sports Stadium, Rhyl.

But the only thing on the agenda for the Welsh champions is making sure that they are still, realistically, in the tie following this Tuesday night's first leg in Slovakia.

Few will give them any hope of progressing against the former winners of the European Cup Winners' Cup.

The Eastern European powerhouse remain a dominant force in Slovakia but, further afield, they have struggled to replicate that success in recent European campaigns.

Bratislava's finest hour came in 1969 when they defeated FC Barcelona in the Cup Winners' Cup final in Basel.

The Saints in Europe

The 'Kings of Bratislava' continued to thrive in the 1970s under Dr Jozef Venglos, the same man who later went on to become such a shock appointment first with Aston Villa, then at Celtic.

But, since the club's golden days in the former Czechoslovakia, the club, situated near the Danube river, have struggled to live up to their well-earned reputation as a strong force in European football.

Last season, they lost 4-2 on aggregate to Ludogorets Razgrad in this same Champions League second qualifying round.

And, ironically, TNS have a better recent record

Under Mike Davies and Carl Darlington, the English-based club saw off Bohemians from Ireland to book a place in the third qualifying round against Belgian side Anderlecht in 2010.

The Saints can count themselves unlucky not to have matched that feat last year after coming close to causing an upset against Polish champions Legia Warsaw.

Ryan Fraughan's shot from the right wing found its way through a crowded penalty area to give Craig Harrison's side the lead in the first leg at Wrexham's Racecourse Ground.

Then, shortly before half-time, Alex Darlington's shot struck the woodwork, before Legia bounced back and won the game 3-1, on the night.

Many clubs would have travelled to Poland thinking that the tie was dead. But that was not the case on this occasion.

The players arrived at the gigantic Pepsi arena, not simply to take photos and sample its unique atmosphere - they were there to cause an upset.

In the end they narrowly lost the second leg 1-0 but, for the second time in four years (the previous occasion having been at Anderlecht), the TNS players left the pitch cheered by the home crowd, who stayed after the final whistle to give the so-called minnows a standing ovation.

The Warsaw boss Jan Urban even invited the TNS management team to fly back over to do some defensive work with his squad, after being impressed by the tactical set-up adopted by Harrison and Darlington.

They have come close in recent seasons to causing a giant killing in Europe's premier tournament.

Maybe this is their best chance yet to make that a reality.

They have won plaudits from the likes of Helsingborgs, Anderlecht and Legia Warsaw - but that is not what they want this year.

TNS want to dethrone the 'Kings of Bratislava' and put Oswestry, that Anglo-Welsh market town in the top corner of Shropshire, well and truly on the European football map.

There will be full-match commentary with Nick Southall from Slovakia this Tuesday night (15 July, 17:45 BST) on BBC Radio Shropshire 96 FM, DAB digital radio and online.