An unforgettable World Cup comes to an end after Sunday's eagerly anticipated final between Germany and Argentina.

BBC Sport pundits Alan Shearer, Chris Waddle, Rio Ferdinand and Tim Vickery have got their heads together to work out their team of the tournament.

You can watch the pundits make their picks on Match of the Day's uninterrupted live coverage of the World Cup final on BBC One from 19:00 BST.

So how do the two compare? 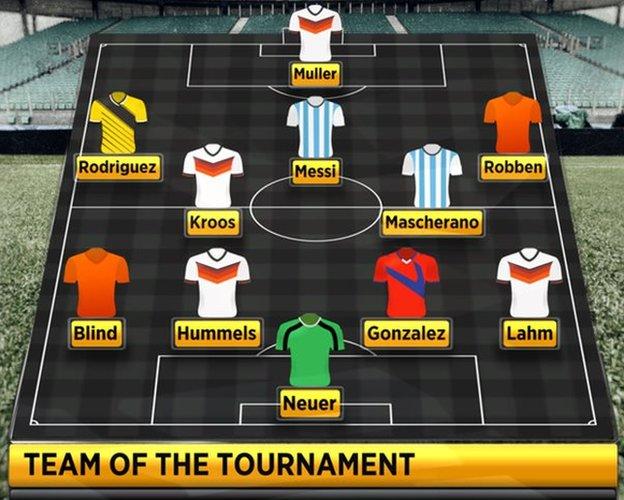 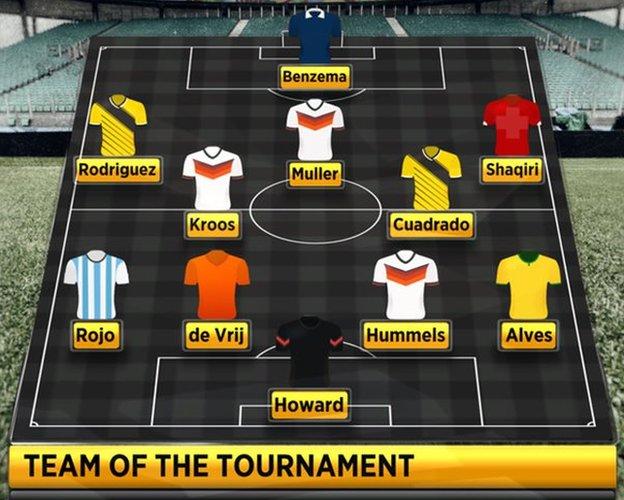 The Opta scoring system is devised by working out an overall score based on more than 250 statistical events, with each event having a positive/negative score awarded based on its outcome. More important stat categories are weighted more heavily, so crucial stats during games make a difference (goals, assists, clean sheets, etc).

RIO FERDINAND: "He had that one game when he played like a sweeper against Algeria and everyone started to wake up and say 'whoa, he is more than just a keeper'. Then he showed in the games after that how he is commanding of his box. He comes out and claims crosses and he is the full package."

ALAN SHEARER: "He can play, save, catch, punch - I don't think that there is a question of his place. Costa Rica's Keylor Navas had a good tournament but the number one is Neuer."

TIM VICKERY: "He has strong arms, has control of 40 yards and lets the back four push up high. Neuer is a terrific goalkeeper."

RIO FERDINAND: "The best right-back in the world. He is consistent. His retention of the ball is unbelievable - he never gives it away, is always around the 90% pass completion rate and is always one of the highest passers in his team. He does it all. The perfect right-back."

ALAN SHEARER: "At right-back definitely but as a sitting midfielder, I'm not so sure. He can do whatever you want, defend or attack."

RIO FERDINAND: "Over the course of the four games he played, Gonzalez was the outstanding centre-back. He did magnificently well. He got his back three in line, he pulled people around, made last-ditch tackles - he has to play for me."

TIM VICKERY: "His side conceded two goals in the tournament, played former world champions and one of the goals they conceded was a silly penalty. He was immaculate and didn't put a foot wrong."

RIO FERDINAND: "I'll pick Mats Hummels, after his performance against France, which was very good."

TIM VICKERY: "I would go for Hummels, especially for the performance against France when I think he won the game."

RIO FERDINAND: "The passes he did for Arjen Robben and Robin van Persie were two of the passes of the tournament and he has defended well. He is an all-round footballer, and I think he is a must."

ALAN SHEARER: "He gave the Netherlands width, whipped crosses in and defended when he had to at times. I know he played the vast majority of games as a wing-back rather than a full-back but I would go for him."

RIO FERDINAND: "He is probably Argentina's most important player after Lionel Messi."

TIM VICKERY: "The harder a game is the more he likes it, the more he digs in deep. He can also play and I think that he has had a sensational tournament. He is an absolute must."

RIO FERDINAND: "I think you could take any one of the three German midfielders and put them in the team and you would be happy. Khedira or Schweinsteiger could also get in quite easily."

CHRIS WADDLE: "What Germany's three midfielders have done in the last couple of games is dominate possession. You can't stop them and once they get in a flow it is very hard to get them off the ball."

RIO FERDINAND: "He is the danger man. Every time he gets the ball he looks like he is going to hurt the opposition. He's the one who gets his head up, running at people with pace, and asks questions of people."

CHRIS WADDLE: "I think he does deserve to be in there. He didn't play well in the semi-final but up until then you have got to say he was on fire. He was excellent but it was one game too many."

CHRIS WADDLE: "His goals have carried him through but he hasn't played great. He's not the same as when we see him play for Barcelona as he plays too deep for Argentina."

RIO FERDINAND: "He hasn't been the Messi we wanted to see by turning up and dazzling us with his skills at breakneck speed but he has had decisive moments in games where he has got his team through. Argentina are in the final now and he has played a huge part in that, albeit not playing well."

TIM VICKERY: "He's so static, he almost has the air of a bored secretary on a Monday morning. But every game there is one moment which could be decisive."

ALAN SHEARER: "Without doubt, Rodriguez has to be in the side. He has scored the goal of the tournament and has been brilliant."

CHRIS WADDLE: "Muller is not really a number nine - he floats in areas. He's not someone who likes to stand up against the centre-halves, he is all over the place, left-right and coming short."

RIO FERDINAND: "He is the first name that goes down on the teamsheet because he has been consistent throughout. The chances he's creating, his goals and ridiculous work-rate he puts in for the team have been phenomenal."

Opta's best of the rest