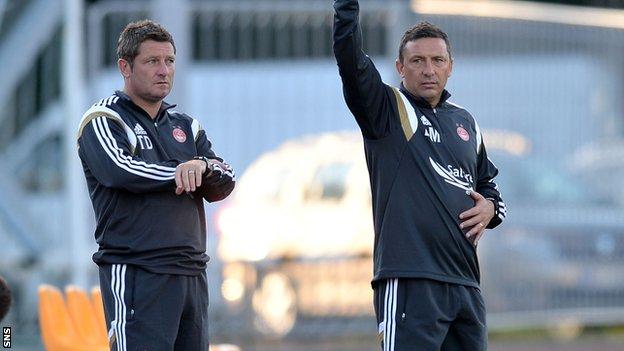 Aberdeen manager Derek McInnes hailed Irish striker Adam Rooney after he hit a first-half hat-trick in the 3-0 win over FK Daugava Riga in the Europa League first qualifying round.

The Dons followed up their 5-0 first leg win at Pittodrie to set up a mouth-watering clash with Dutch side FC Groningen.

"The three goals were well worked - it was very clinical from Adam," he said.

"Two of the finishes in particular were top quality."

Aberdeen were rarely in danger in the tie, but now face a much tougher test when the Eredivisie side visit Pittodrie next week.

"Other than one or two balls over the top of us, we dealt with what they had to offer," said McInnes.

"In general the approach was spot-on, as it had to be to give them no encouragement.

In general the approach was spot-on, as it had to be to give them no encouragement.

"We asked the boys to be professional. It was a mature and competent performance, just what was required.

"The pace of the game dropped in the second half, understandably, we didn't need to chase it and they defended a bit deeper.

"All in all over the two legs there was a lot to be pleased about but we know there are bigger challenges ahead."

Thoughts now turn to the clash with Groningen with McInnes hopeful Aberdeen may have a fitness advantage over their rivals.

"They've got a bit of pace, a bit of presence," he said. "They play a similar system to ourselves.

"In terms of competitive matches they're obviously a bit behind us. I don't know how many closed door games they've had, but certainly we're up and running now.

"The advantage that Daugava possibly had over us, we might have that slight advantage over them.

"It's good to get competitive football started and we'll need to be competitive in that game certainly."