The 2014 World Cup in Brazil has been voted the greatest in the tournament's history by BBC Sport readers.

This summer's World Cup, which has seen great goals, gritty underdog displays and shock results, came out on top in Friday's Sportsday vote with 39%. 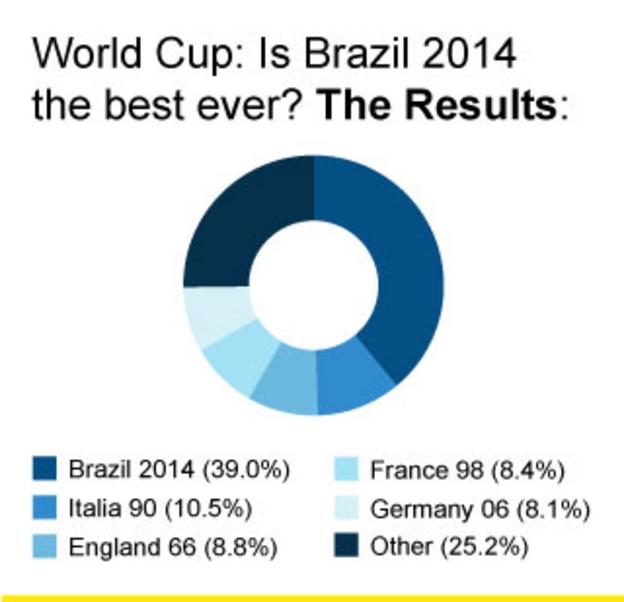 In total Brazil topped six of the nine categories readers voted on.

Mexico 1986 was voted the most controversial World Cup and the one with the best stage for great players. Germany was voted best host for 2006.

Nine votes were run on the BBC Sport website from 08:00 to 14:30 BST on Friday with tens of thousands of you taking part. The results are not intended to provide a definitive view of World Cup history - they are simply a sample of our readers' opinions. Here are the voting categories:

It is of little surprise then, that Brazil 2014 also ran away with readers' votes on the tournament with the best goals scored, as it took 44.1%.

Brazil 2014 was also voted the most competitive in World Cup history, with 55.9% of readers recognising a tournament that has seen the likes of Chile, Costa Rica and Colombia excel, as well as plenty of closely-fought contests.

There have been few heavily one-side contests with, surprisingly, only the likes of Brazil, Spain and Portugal on the end of hefty defeats.

Brazil's loss - the shock 7-1 demolition by Germany in the semi-finals - made it the overwhelming winner of the best match at a World Cup, taking 49.7% of the vote, ahead of England's 1966 World Cup final win against West Germany (14%).

However, the overall competitive nature of this summer's tournament meant readers also felt it produced the best underdog results.

Costa Rica topping a group which contained former World Cup winners Uruguay, Italy and England, coupled with their run to the quarter-final, and an equally impressive run by Colombia, along with determined displays from Algeria and the United States was enough to see 2014 take 48.2%.

The 2002 tournament in South Korea and Japan, which saw Turkey finish third and the Koreans fourth, took the second-highest share of the votes with 29.4%.

The late drama category was the closest of the six that Brazil 2014 came out on top of, as it collected 38.6% of votes.

In total, seven games have gone to extra-time while fans have been treated to four tense penalty shootouts, and that was enough to convince Sportsday readers that this summer has been a tournament featuring more drama than the 1966 World Cup in England.

That tournament, of course, saw West Germany score a late equaliser in normal time of the final, only for Geoff Hurst to then seal England's first and only World Cup win in extra-time.

The comfortable winner of the most controversial World Cup vote was Mexico 1986, a tournament that saw Diego Maradona score the 'Hand of God' goal against England as Argentina won 2-1 in the quarter-final.

That tournament collected 47.7% of votes, with Spain 1982, a tournament where a 1-0 win for West Germany against Austria was enough to see those two sides progress at the expense of Algeria, taking 19.6%.

Maradona may have been the centre of controversy in 1986, but his many dazzling displays in that tournament means it was voted as the best World Cup in terms of where the big players performed, claiming 32% of votes. Zinedine Zidane's magical performances in France 1998 saw that World Cup claim the second-highest amount of votes with 17.7%.

Finally, 30.2% of readers voted the 2006 World Cup in Germany as the best-staged tournament.

Perhaps surprisingly, though, was Brazil 2014 being voted the second best with 22.8% of the votes, given the question marks over the readiness of stadiums in the run-up to the tournament.

See what readers were saying about the greatest World Cup in Friday's Sportsday.