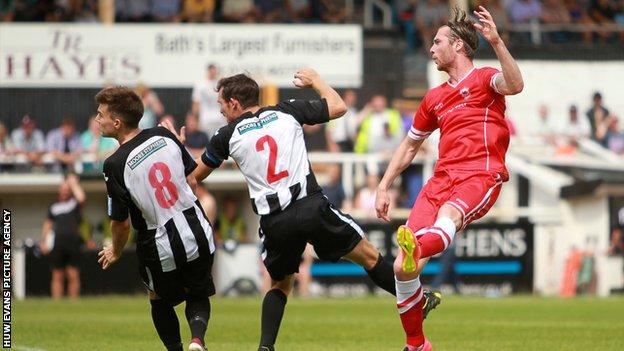 Cardiff City were held a draw by Conference South side Bath City in a pre-season friendly at Twerton Park.

Cardiff manager Ole Gunnar Solskjaer changed his entire team at half time, and saw them take the lead when Norwegian winger Jo Inge Berget fired in from the edge of the box.

The Bluebirds were reduced to 10 men when Kevin Theophile-Catherine limped off and was not replaced.

Cardiff were without Steven Caulker and Fraizer Campbell who are both the subject of transfer speculation.

The Bluebirds have agreed a fee with Queens Park Rangers for England international defender Caulker while striker Campbell is being linked with a move to Crystal Palace.

Cardiff manager Ole Gunnar Solskjaer told BBC Wales: "It was a typical pre season game, they've had two weeks of heavy training and we saw some heavy legs out there - but that's fine at this stage of pre-season.

"The worry was Kevin [Theophile-Catherine] coming off. He's tweaked groin or a thigh and hopefully won't be too bad. We'll take him with us [on the pre-season tour of Austria] for treatment anyway.

"For the boys who came through the second half with 10 men it was a good workout - they all put a shift in and it's what it's all bout this time of the season."