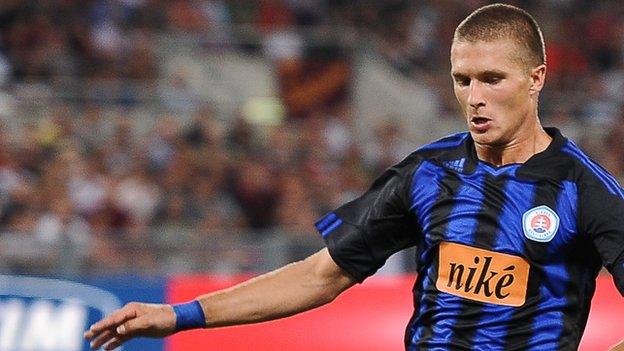 The New Saints will go into their Champions League second qualifying round return leg only a goal down against Slovan Bratislava.

Defender Cikos cut back before threading his left-footed shot through the visiting defence to seal victory.

The teams meet again on 22 July at Rhyl's Corbett Sports Stadium, as there are concerns over the Park Hall pitch at the Saints' usual home in Oswestry.

Craig Harrison's side secured an eighth Welsh Premier League title last season and also won the Welsh Cup with a 3-2 victory over Aberystwyth.

The Oswestry-based club, who lost over two legs to Legia Warsaw in last season's Champions League, reached the third qualifying round in 2010 before losing to Anderlecht.

Slovan Bratislava, European Cup Winners' Cup victors in 1969, have never advanced beyond the Champions League third qualifying round, but reached the group stages of the Europa League in the 2011-12 season.

"We wanted the tie to be alive going back to Rhyl and it's certainly alive, we put a good performance in and I think we proved we can cause them problems.

"It's disappointing [not to get an away goal], it's key in European football now but... at home we're prolific, we score a lot of goals.

"Domestically we've not been beaten for over 22 months at home, so we've given ourselves an opportunity to go back out there on Tuesday and put a performance in."