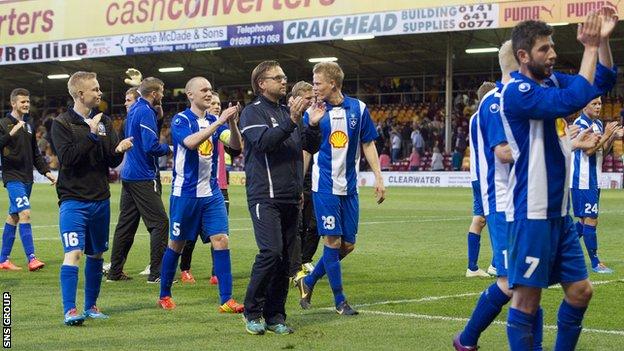 A stoppage-time penalty denied Motherwell victory in the first leg of their Europa League second qualifying round tie against Stjarnan.

Olafur Karl Finsen scored his second spot-kick of the night at Fir Park to draw the scores level.

It was reward for the Icelandic side's refusal to buckle despite the home side's early dominance.

Motherwell established an early lead through a Josh Law double, but they could not hold onto the lead.

Stjarnan are novices in European competition, but they did not arrive at Fir Park with an inferiority complex.

Their intention, according to pre-match comments to the media, was to defend stoutly and try to hold Motherwell at bay. But a side that is unbeaten in 11 league matches and that comfortably dispatched Bangor City, scoring eight times in the process, in the first qualifying round is entitled to feel that more can be achieved.

There was no restraint, then, when Motherwell allowed an early opportunity for the visitors to break on the counter-attack.

Veigar Pall Gunnarson, a short, squat but clever midfielder who has 33 caps and experience of playing at the top level in Norway and France, started the move with a smart pass upfield. When the ball was then delivered into the box, he stooped to meet it with a header, but steered it wide from inside the six-yard box.

Complacency was not to afflict Motherwell, and the response was a sustained period of pressure. Lionel Ainsworth saw a shot deflected wide.

Stjarnan soon conceded when John Sutton's header was parried away by goalkeeper Ingvar Jonsson, only for Law to turn in the rebound from close range.

Law would have welcomed the opportunity to make an immediate impression. It was his competitive debut, but there was expectation to live up to since his brother, Nicky, enjoyed a fruitful spell at the club.

There are similar characteristics, with both being attacking midfielders capable of deft touches on the ball.

Law's second goal, when he chipped the ball over Jonsson, came after Iain Vigurs took advantage of Niclas Vemmelund's slip to drive forward from the left then play the ball through to his team-mate.

The goal brought comfort to Motherwell. The sense of command was emphasised when another move brought an opportunity for Sutton, only for the striker to fire over from 16 yards.

Even so, Stjarnan were not wholly subdued, and they found the means to haul themselves back into the game.

When a shot from distance struck Keith Lasley on the arm inside the area, referee Michael Johansen pointed to the spot, with Finsen converting the penalty.

Craig Reid then had to make a belated sliding block to prevent the same player from having a free shot on goal while Dan Twardzik was out of position.

The home side were less dynamic after the break, and tiring legs and minds turned out to be less alert. Stjarnan spurned several chances to equalise, with Finsen missing from close range and flashing a shot across goal, while Pablo Punyed could not make enough contact on a cross.

Carelessness eventually told, though. Lasley and Reid were penalised for pulling back Rolf Toft, and Finsen remained cool to convert his second penalty.