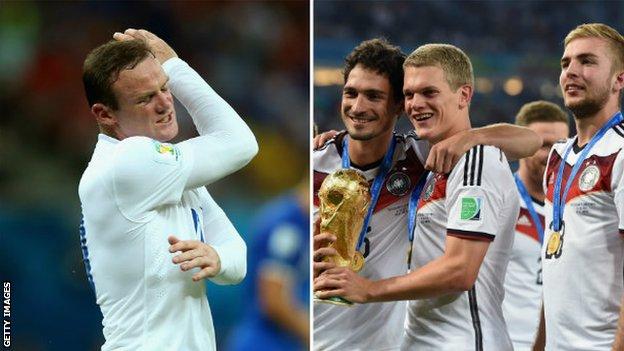 Germany lifted the World Cup a decade after exiting Euro 2004 without a win.

A revolutionary plan and the collective will to carry it through changed their fortunes and culminated in Sunday's 1-0 win over Argentina.

Football Association chairman Greg Dyke has challenged England to win the World Cup in 2022 - so can the low of group-stage exit in Brazil be one day viewed as the bust before the boom?

BBC Sport examines how, and indeed if, England can 'do a Germany'.

Exiting a major tournament at the group stage, as England did this summer, will sound familiar to Germany.

They finished bottom of their group at Euro 2000 and, although they reached the World Cup final in 2002, failed once again to progress to the knockout stages at Euro 2004. That led to a pivotal moment for the country and the national team - the decision that a radical overhaul was needed.

Along with his assistant Joachim Low, new coach Jurgen Klinsmann set about restructuring German football. The path to do so was challenged by many.

But the German football association, the DFB, put "a lot of pressure" on clubs to develop academy programmes.

"We held workshops with coaches and players, asking them to write down on flip charts three things: how they wanted to play, how they wanted to be seen to be playing by the rest of the world and how the German public wanted to see us playing," said Klinsmann in 2010, the year Germany reached the semi-finals of the World Cup.

While the Football Association in England does support the Premier League's Elite Player Performance Programme - which aims to enhance youth development - total unity on a direction has proven elusive.

"People who write, 'England should follow the German route', are oblivious to the obstacles or believe in magic wands," tweeted Gary Neville on the complexity of creating a holistic approach.

Unity was fundamental in Germany's approach, according to Lutz Pfannenstiel, head of scouting at Bundesliga side Hoffenheim.

"I think there was not one important part of the system Jurgen started, it was the whole thing. If you lifted one part of the skeleton out, it wouldn't work," said Pfannenstiel, who played for 25 different clubs.

"You cannot take it and use it in any country. For example, if you were to use this in Brazil now, with the size of the country, you would need 50 years longer maybe because of all the states and different leagues."

At the same time, Germany invested more in the players' education, increasing the number of elite coaches.

The reward of that is clear today, with, Uefa data suggesting the country boasts 6,934 coaches holding Uefa's A and Pro qualification badges. England, meanwhile, has 1,457. Furthermore, there are 21,731 holders of Uefa B badges in Germany, compared to 9,420 in England.

But while the number of elite coaches may be lower than in some other European countries, the FA says England has the largest and most comprehensive age-specific coaching setup in the continent, awarding 40,000 qualifications a year.

Coaching methods have also been redefined and that, coupled with the opening of the FA's centre of excellence St George's Park in 2012, means it is an area that is not only increasing in quality, but is also becoming a benchmark other Football Associations appear keen to copy.

Interestingly, a delegation from the DFB were visitors to Burton-upon-Trent last month on a fact-finding mission, observing one of the FA's youth coach education programmes.

"Since the end of 2009 we have been developing a new pathway for children to learn and play the game which focuses on skill and technique development, so smaller-sided version of the game," Nick Levett, FA's National Development Manager, told BBC Radio Sheffield.

"In terms of coaching, we are very much leading the way around Europe in youth and age-appropriate coaching qualifications.

"There is a huge amount going on but ultimately it is a 10-year plan. It is a bit like gardening. You stick a bulb in the ground and you don't get a flower the next day. It is a long-term thing."

The core of Germany's World Cup-winning squad came through the international youth ranks together.

Goalkeeper Manuel Neuer, defenders Mats Hummels, Benedikt Howedes and Jerome Boateng and midfielders Sami Khedira and Mesut Ozil all started the 2009 Under-21 European Championship final, in which they trounced England. All but the injured Khedira were in the starting XI against Argentina.

A seventh player from that crop - Fabian Johnson - was also in Brazil as part of the United States squad.

Meanwhile, the only player from England's 23-man World Cup squad to have played in that 2009 final was James Milner.

The likes of Luke Shaw, Adam Lallana, Raheem Sterling and Ross Barkley had not played in a major tournament at under-21 level, with the latter three playing less than 10 games at that age group. In contrast, the six who featured for Germany in 2009 all made at least 15 appearances before progressing to the senior side.

"That is something we could learn from Germany," former England defender Phil Neville said. "Germany keep a core of players together and they are exposing them to championship football at U21 level.

"We could have had six or seven of our World Cup squad at the last U21 tournament but we did not take them.

"That is something we could look to improve upon because if they did, that batch of players could then go on to go to a World Cup together two years later."

The likes of Neuer, Ozil and Khedira came through the DFB's talent development programme, introduced as part of German football's youth development overhaul.

Similarly, in 2011 the Premier League introduced the EPPP, a four-tiered academy system designed to expose developing footballers to the best coaching and education.

It is a system that Neville believes works, but his concern lies with what happens to those players once they graduate from the youth ranks.

"I believe we are producing a better technical players than we have ever done," he said. "Our players were always technically inferior to foreign ones but now there are English players who are technically as good as those from overseas at the same age.

"The biggest problem is the gap from 19 to 21, where players lose their way a little bit because they are not getting the opportunity.

"I broke into the first team at 17. Now the young players are not breaking in until they're 21, 22. They need to be getting in younger. They lose 12-18 months of their career by not getting enough experience of the top level.

"This is the biggest area for me that we need to address."

After England's exit in Brazil, manager Roy Hodgson was asked if a successful national team and thriving Premier League could co-exist.

The statistics suggest that may be a struggle. English players contributed to only 32% of the minutes played in the Premier League's first three months of last season, compared to 50% of home-grown players in Germany and 58% in Spain.

Indeed, only the Cypriot league boasts more overseas talent than England's top flight, according to a study of 31 countries carried out by the Centre International d'Etude du Sport in January.

"We want the best players in the world coming to the Premier League. The only way players can get better is by playing with the best," added Neville, who believes work is under way on an English plan to blood more talent.

"It is the rung below that we don't want. They are filling the spaces available to young players and that is what we don't want - the middle and lower tier of foreign players."

English managers have long cited the fact home talent is overpriced as a reason to scour the globe, with in excess of 1,500 foreign players arriving in the Premier League since its inception in 1992.

The club-over-country power struggle is one Germany can stomach, with strong lines of communication and a collaborative process in place between the Bundesliga and the DFB.

Working for the greater good does not shackle the individual cogs in the system, either. While no other league can match the Premier League's record TV deal - £3.018bn over three years - the Bundesliga yields around £2bn for a four-year package.

It remains the only one of Europe's major five leagues in which TV revenue is not the largest revenue source, instead generating money through the highest attendance figures and by maintaining lower wage levels.

Point four in Dyke's report into improving the game domestically is that England "lags behind in the quantity and quality of affordable grassroots facilities".

Indeed, the FA's own grassroots survey in 2011 returned a damning finding, as 84% of respondents identified facilities as the biggest issue facing the game.

Strain on the system is high - with 3.5 million five-to-15-year-olds playing each month and some 6.5 million adults claiming to play the sport - but funding is scarce.

To avoid the typical abandonment of winter football at youth level, artificial 3G pitches are in demand and England boasts 639.

By comparison, Germany has over 5,000 - a number stimulated greatly by the fact they are funded by government and local authorities.

"Facility wise at the elite level, there is not much difference in the academies of the top clubs," added Pfannenstiel, who recently visited Aston Villa to share ideas.

"Where things are better in Germany is the surrounding facilities. So for example, we are willing to use gyms with newer technology and different medical approaches, working with more futuristic methods if you like.

"Also, we tie a close link in between football and education, so a player at an academy can do his studies, have the psychological help he may need and specific support, so it is a full A to Z coaching approach."

The Premier League and FA Facilities Fund, managed by the Football Foundation, commits £34m per year to grassroots facilities. This includes £12m a year each from the FA and Premier League, and £10m from the government.

The contributions are not enough according to the Local Government Association and it seems more spending, more coaches and a collaborative approach will be needed if one day countries will aim to 'do an England'.

For BBC pundit and former England striker Alan Shearer, the national team "still has a long way to go", adding: "We have to be able to organise and get further in the World Cup than we have done. This tournament has proved you don't have to have great players all over the park to progress."

Match of the Day presenter Gary Lineker is more optimistic.

"It was massively disappointing to go out after two games and so early in the tournament, but I saw enough in those games to suggest the future is not as bleak as I thought it was four years ago," he said.

"With this bunch of young players, in two or four years' time, there is reason for hope."