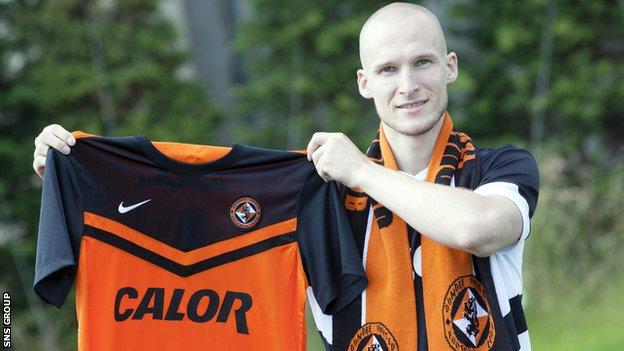 The 26-year-old has agreed a two-year deal after leaving Norwegian club Tromso.

Fojut began his career at Bolton and had spells on loan at Luton and Stockport before joining Slask Wroclaw in his homeland in 2009.

"Once the opportunity came up here I didn't have to think a long time about it," Fojut told BBC Scotland.

"Jaroslaw is a strong and aggressive player. He will add to our defence and I am delighted to have secured him

"I'm really excited, I always wanted to come back to the UK, this is a step I've planned for a long time.

"I was here since I was 16 so I always thought the British style is the way I wanted to play. The most important things are the fans and the culture here, it's all about football so it's nice to play here and be appreciated if you do well."

Talking to the club website, United manager Jackie McNamara said: "He is a commanding player who knows British football from his time at Bolton.

"Jaroslaw is a strong and aggressive player. He will add to our defence and I am delighted to have secured him."

In January 2012 Fojut signed a pre-contract agreement to move to Celtic, but the deal was cancelled after the player suffered a cruciate ligament injury.

Dundee United have also signed defender Callum Morris on a two-year deal after his contract with Dunfermline expired but they lost Gavin Gunning to Birmingham under freedom of contract.