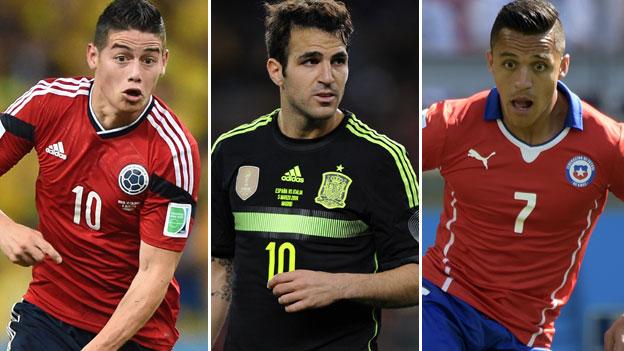 The World Cup may be over, but the Premier League season starts in exactly a month and all 20 clubs will be busy trying to add to their squads in time for kick-off.

A BBC Radio 5 live special on Wednesday will discuss all the main moves, with Ian Payne joined by European journalists Raphael Honigstein and Andy Brassell and former sporting director of Monaco Tor-Kristian Karlsen,

Here we review the business done so far this summer.

Will Liverpool become this season's Tottenham?

Last summer Tottenham sold Player of the Year Gareth Bale for north of £80m to Real Madrid. Spurs signed a host of players to compensate, but some, like forward Erik Lamela (signed for £25.7m from Roma) and Roberto Soldado (£26m from Valencia), proved to be expensive flops, and the club finished outside the top four.

This season it is Liverpool who have plenty of money to rebuild with, after Player of the Year Luis Suarez was eventually sold to Barcelona for £75m.

Like Spurs, the Anfield club have already made big moves in the transfer window with the signings of Southampton pair Adam Lallana and Rickie Lambert for a combined total of £29m.

They also sealed a £10m deal for Germany Under-21 midfielder Emre Can and completed the transfer of Serbia winger Lazar Markovic for £20m from Benfica.

That brought spending by manager Brendan Rodgers to £59m. That figure might have been £79m had Southampton accepted a £20m bid for Croatia defender Dejan Lovren. He said he wants to leave St Mary's, so it is worth keeping tabs on that one.

Liverpool are not the only ones who have been busy. At Old Trafford, Manchester United have also been acting quickly following the appointment of Louis van Gaal as manager earlier in the summer.

They have already spent a total of £56m to recruit Athletic Bilbao's Spanish midfielder Ander Herrera and England and Southampton full-back Luke Shaw.

And United have an enviable revenue stream - strengthened by their new £750m kit deal - so there could be more big signings on the way, with Juventus and Chile midfielder Arturo Vidal, Arsenal defender Thomas Vermaelen and Borussia Dortmund midfielder Marco Reus all linked with moves.

Will Arsenal be the team to catch?

It appears manager Arsene Wenger is dipping his hands into that 'war chest' and pulling out a wad of notes for a big spending spree.

One player who has already signed is forward Alexis Sanchez, who impressed for Chile in Brazil and cost the Gunners about £35m from Barcelona.

Wenger's French contingent could also increase in volume. The club are set to sign full-back Mathieu Debuchy from Newcastle to replace Bacary Sagna, while QPR striker Loic Remy, who impressed on loan at the Magpies, and Real Sociedad forward Antoine Griezmann have been strongly linked.

In contrast to last season's big influx, Tottenham are yet to spend a penny this summer.

Jose Mourinho considers former striker Didier Drogba one of the best players to play for him during his first spell with the Blues.

So perhaps it came as no surprise that the Portuguese brought in Spain and Atletico Madrid striker Diego Costa, another player renowned for his strength and power.

He might have struggled for Spain at the World Cup, but did score 35 goals in helping Atletico to the La Liga title last season. Costa's arrival should see Demba Ba complete a move to Besiktas in Turkey.

Ashley Cole left the club to join Roma and he has been replaced by Atletico Madrid left-back Luis Felipe.

Despite the big outlay, it is worth remembering Chelsea sold Brazil defender David Luiz for £40m to Paris St-Germain.

Compared to previous years, Manchester City have been relatively frugal so far this summer.

They have recruited Fernando for £12m from Porto, while manager Manuel Pellegrini also signed goalkeeper Willy Caballero from his former club Malaga for £4.4m.

City's squad was also strengthened with the arrival of right-back Bacary Sagna from Arsenal on a free, and the champions are set to make their first 'major' signing of the window - France defender Eliaquim Mangala for about £32m - following advanced talks with Porto.

However, perhaps City's biggest transfer business will be keeping hold of influential midfielder Yaya Toure. The Ivorian was reportedly "very upset" by a perceived lack of respect shown to him by City's owners this summer and could be angling for an exit.

Newcastle owner Mike Ashley's buy 'young, gifted and cheap' formula has worked in the past - Yohan Cabaye, Demba Ba and potentially Debuchy have all been brought in cheaply and sold for a profit.

This summer the Magpies have brought Jack Colback to the club from rivals Sunderland for free, to the consternation of the Black Cats. They have also spent £6m on Ajax captain Siem de Jong and this week added French attacking midfielder Remy Cabella in a reported £12m deal, while Netherlands right-back Daryl Janmaat is reportedly close to joining. All four players are under the age of 26.

Southampton, with money to spend after the sales of Shaw, Lallana and Lambert, have signed two players from the Dutch Eredivisie for a total of about £20m. The influence of new boss Ronald Koeman might have been a telling factor in the recruitment of Italian striker Graziano Pelle from his old club Feyenoord and FC Twente attacking midfielder Dusan Tadic. Can they replace Lambert and Lallana?

Aston Villa and Everton have also gone down the 'get a freebie veteran' route. Former loanee Gareth Barry, 33, has completed a permanent move from Manchester City to Everton, while Joe Cole, 32, has swapped the West Ham claret and blue shirt for another at Villa Park.

West Ham manager Sam Allardyce is reported to have £20m to spend, with a big chunk of that expected to be given to Mexico club Pachuca for their striker Enner Valencia.

The 24-year-old was the pick of the Ecuador players at the World Cup - impressing with his work-rate and scoring three goals.

Newly promoted QPR are reported to be close to signing former Manchester United stalwart Rio Ferdinand and defender Steven Caulker from Cardiff. They are also understood to have agreed a £5m fee for Ajax's Iceland striker Kolbeinn Sigthorsson.

Another of the new sides, Burnley, have drafted in top-flight experience without breaking the bank in the guise of Steven Reid, Michael Kightly, Matt Gilks, Marvin Sordell and Matt Taylor, while they also added Middlesbrough striker Lukas Jutkiewicz for £1.5m on Tuesday.

And Leicester - whose chairman Vichai Srivaddhanaprabha said in May he could spend £180m - have only signed Marc Albrighton and Matthew Upson so far. Plenty of work to be done.

Barcelona have been one of the busiest European teams so far, buying Suarez and selling Sanchez and Fabregas. Barca have also added goalkeepers Claudio Bravo and Marc-Andre ter Stegen, plus midfielder Ivan Rakitic.

Bayern's big move was wrapped up months ago with the capture of Borussia Dortmund striker Robert Lewandowski, who was in turn replaced at Dortmund by Italy forward Ciro Immobile.

Ashley Cole became a rare Englishman abroad when he signed for Roma from Chelsea, while Real Madrid have been ominously quiet so far but tend to make at least one big-money move per summer...

Perhaps that big capture for Real will be Colombia forward James Rodriguez, who won the Golden Boot at the World Cup with six goals.

The 23-year-old only joined Monaco last summer for over £35m but is reportedly on Real's radar and said after his side were knocked out of the World Cup that it would be "a dream come true" to move to Madrid.

Watch this space. With the transfer window closing at 23:00 BST on Monday, 1 September, there is plenty of time yet for deals to be done...