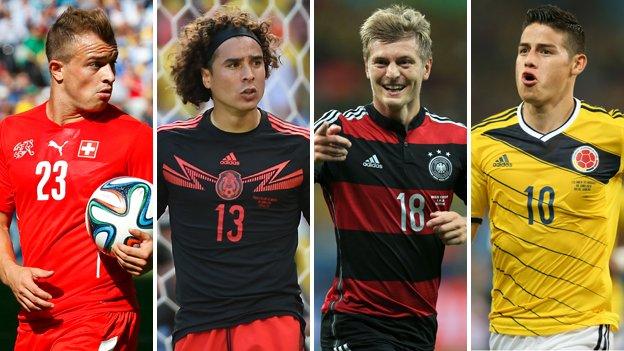 They may not be new to everyone, but Brazil 2014 brought a handful of players to the attention of a wider global audience who sat up and took notice of them.

Even more importantly for the players' agents, it is likely to have sparked the interest of the clubs with the deepest pockets, who may well be about to spend big on their talents.

Here, we look at five stand-out transfer targets to emerge from the World Cup finals - and five deals that were done during the tournament.

The Golden Boot winner was the break-out star at the World Cup and is likely to be the subject of significant interest from Europe's top clubs as a result.

The 23-year-old Colombia forward scored six goals in five matches, earning his side a quarter-final place for the first time, before they lost to hosts Brazil.

Rodriguez only moved to Monaco from Porto last year, but his dynamic displays in Brazil - not least his stunning volley against Uruguay in the last-16 - have put him firmly in the transfer spotlight and are likely to have increased his valuation significantly from the £38.5m the French club paid for him last summer.

You could take your pick from the German team, such is the strength in depth of Joachim Low's World Cup-winning squad, something exemplified by the fact it was substitute Mario Gotze who scored the winner in the final.

But one of Germany's most consistent performers looks set to leave the Bundesliga. The performances of midfielder Toni Kroos in all seven games have made him a firm target for Real Madrid.

The Bayern Munich playmaker scored two goals in Germany's 7-1 rout of hosts Brazil and had the joint-highest number of assists, after pulling the strings in the Germans' irrepressible midfield.

His midfield partner Sami Khedira may well make way for his international colleague at Real, with reports linking him with a move to Arsenal.

The engine of an impressive young French side, Pogba was named the best young player of the tournament and won high praise all round after helping Didier Deschamps' team to a quarter-final berth against eventual champions Germany.

The 21-year-old Juventus midfielder scored against Nigeria in the round of 16 tie, and will be at the forefront of Deschamps' plans when France host the European Championship in two years' time.

But the former Manchester United youngster may return home a lot sooner, as he is reportedly on Paris St-Germain's list of transfer targets this summer.

Nicknamed the Alpine Messi, the diminutive Swiss has been identified as one of a number of forwards who could be in Liverpool's sights as they begin the task of replacing Luis Suarez.

The Bayern Munich striker scored the only all left-footed hat-trick in World Cup history - against Honduras - and was named man-of-the-match twice as he helped his team reach a last-16 tie against Argentina.

His group stage treble included a strike from outside the box that ranks among the best in the tournament.

Currently a free agent after leaving French club Ajaccio, the Mexican played like a man in the shop window and could barely have done any more to attract the attention of clubs on the look-out for a new goalkeeper.

The 29-year-old produced a man-of-the-match performance to deny Brazil in the group stage and kept the Netherlands at bay for 88 minutes before being undone eventually by Louis van Gaal's men.

His team departed at the last-16 stage, but Ochoa was one of the stand-out performers for the Mexicans. He joins Manuel Neuer, Tim Howard and Keylor Navas - who is attracting his own share of attention after Costa Rica's fairytale run - as the best goalkeepers of the tournament.

Despite receiving a four-month Fifa-imposed ban from all football-related activities for biting Italy's Giorgio Chiellini, Uruguay striker Luis Suarez will become the most expensive transfer of the summer should he pass a medical at Barcelona.

Suarez will not be able to play any domestic football until the end of October, but that did not dissuade the Catalan club, who identified Suarez as central to their rebuilding process this summer, after a disappointing 2013-14 season.

Thankfully for the Brazilian defender, his move to Paris St-Germain from Chelsea went through before Brazil's campaign disintegrated in their 7-1 humbling at the hands of the Germans.

Luiz was captain in the absence of his new club defensive partner Thiago Silva and PSG fans may well have their reservations after poor defensive performances in the capitulation against Germany and the 3-0 play-off defeat to the Netherlands.

Chelsea may well see it as a good piece of business, however, after reportedly receiving £40m for a player they bought from Benfica for £21,3m in January 2011.

Chelsea invested some of the Luiz transfer fee in another player who had a disappointing World Cup, Spain striker Diego Costa.

The 25-year-old forward's most notable contribution in Brazil came when he won the penalty that allowed the defending champions to open the scoring in their 5-1 drubbing by the Netherlands, before they exited at the group stage.

Costa came into the World Cup on the back of his best season to date, however, scoring 36 goals in 52 games for Atletico Madrid, as they won their first La Liga title since 1996 and reached the Champions League final.

The Chile forward was central to his team's impressive run at the finals, scoring twice and setting up another, before they were edged out on penalties by Brazil in the last 16.

He subsequently moved from Barcelona to Arsenal for a fee in the region of £35m.

The 25-year-old had initially been linked with Liverpool as part the Luiz Suarez deal, but instead was signed by Arsene Wenger on a long-term deal.

The Belgian striker, another of the breakthrough performers in Brazil, is thought to be close to completing the formalities of a move from French club Lille to Liverpool.

Talks over a deal were already thought to be underway by the time the 19-year-old scored a late winner in the Belgians' 1-0 win over Russia. The teenager then went on to start the last-16 victory over the United States.

The Anfield club could pay £10m with add-ons, but plan to loan Origi back to Lille for the 2014-15 campaign.