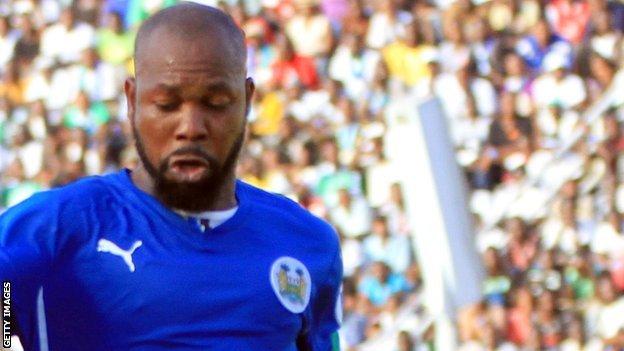 Ex-Sierra Leone captain Ibrahim Kargbo is among 15 players and officials who have been suspended indefinitely over allegations of match-fixing.

The three other players implicated are Ibrahim Koroma, Samuel Barlay and Christian Caulker.

Three referees and another eight officials, including Rodney Michael, are the others to have been suspended.

The allegations relate to a World Cup qualifier against South Africa in 2008 which ended goalless.

Kargbo said he was "in total shock" and referred to it as "a political interference into the running of football".

Speaking to Reuters from London, he called the suspension "a witch-hunt because I am leading a crusade for the FA to hold its annual congress which is stated in the constitution to (be held) not later than August this year".

The SLFA and the Ministry of Sports said in a statement it had it had received "credible and tangible information" on the alleged involvement of the group in match-fixing.

The statement, jointly signed by sports minister Paul Kamara and Sierra Leone Football Association president Isha Johansen, added that an "investigating committee will be constituted by the SLFA and the Ministry of Sports to probe all allegations of match-fixing".

It also said that the three players who had been called up to play in Sierra Leone's Africa Cup of Nations qualifier against Seychelles in Freetown on Saturday have been withdrawn.

BBC Sport understands two players in the Sierra Leone squad, who are not implicated in the allegations, have threatened to leave the camp in protest at the treatment of their colleagues.

Football administrator Michael was controversially disqualified from running for FA President in August last year on allegations that he had links to a sports-betting company.

On Thursday Michael told BBC Sport he feels he is a victim of a "witch-hunt" and denied all claims of wrongdoing. He added that he is seeking legal advice over the allegations.