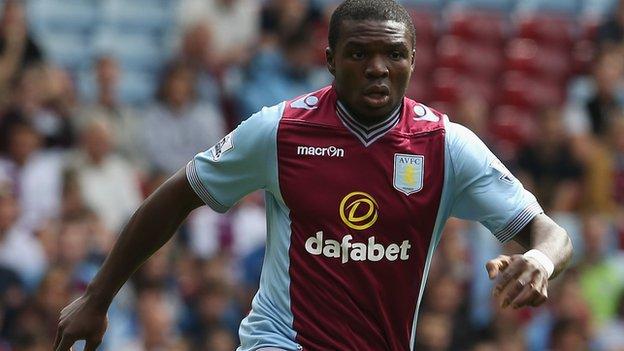 Aston Villa defender Jores Okore says it feels as though he is making a fresh start to life in the Premier League after missing most of the last year through a serious injury.

Okore, 21, ruptured knee ligaments against Newcastle last September in only his fourth game for club.

I'm really positive about this year, I'm really looking forward to the season

But his Premier League career was curtailed half an hour into his second start, when he suffered the injury that needed surgery and has kept him on the sidelines ever since.

"I was really disappointed and it was unlucky to get inured for such a long time. I was playing well," Okore said.

"Hopefully, I can get back to my old self and get even better and start again.

"I want to defend with my heart and be solid, powerful and aggressive."

Okore has seen Villa boss Paul Lambert bring in Kieran Richardson,Joe Cole and Philippe Senderos so far this summer, while centre-back Ron Vlaar embellished his reputation by impressing in the Netherlands' run to the World Cup semi-finals.

And Okore thinks Villa have cause to be optimistic this season, after finishing 15th in 2013-14.

"We've got a good squad with a lot of good players in my position," he said.

"There's a lot of competition and we've got a good mix of young and older players that'll bring the team together.

"I'm really positive about this year, I'm really looking forward to the season."

Villa open their Premier League campaign with a trip to Stoke City on Saturday, 16 August.