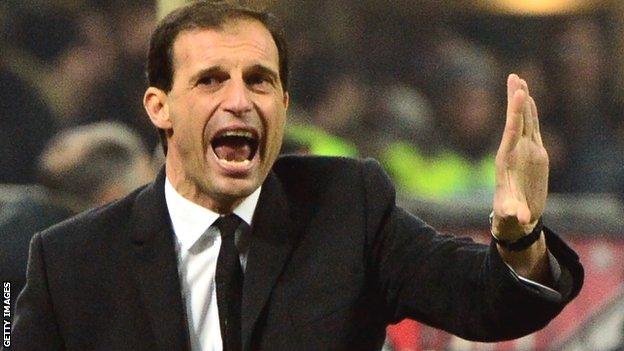 Allegri, 46, was sacked by Milan in January and replaces Antonio Conte, who left the Italian champions on Tuesday.

"It is an honour for me," said Allegri. "I'm very happy and I know what a big job coaching Juventus is."

Juventus director Giuseppe Marotta said: "Juve's aim has always been to keep winning, a real must given the club's prestige and past success."

Allegri, who has also coached Cagliari, won the Serie A title with Milan in his first season in charge in 2010-11.

Juventus have won the title in each of the last three seasons, finishing 45 points ahead of Milan last year.

Allegri added: "We'll compete for the title all the way. As for Europe, we need to have a great run in the Champions League."

Conte quit on Tuesday with a year left on his contract, stating he felt it "may be more difficult to keep winning with Juventus" in the future.

Allegri was sacked by Milan midway through last season after a dreadful start to the campaign that left them languishing in mid-table, and was replaced by Clarence Seedorf.

Seedorf, part of the BBC punditry team during the World Cup, left Milan at the end of the season and has been replaced by Filippo Inzaghi.