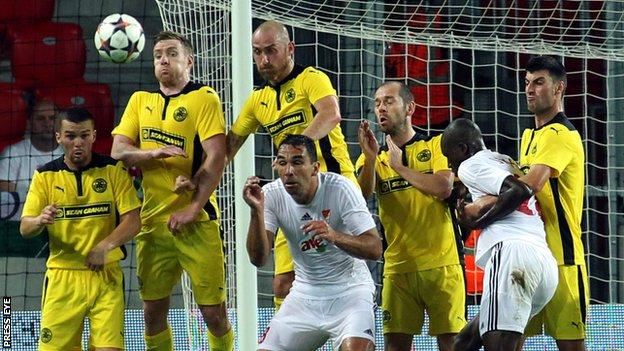 Cliftonville defender Jaimie McGovern was sent off as the Reds were beaten 2-0 by Debrecen in the Champions League second round qualifier.

After a scoreless first leg in Belfast, Cliftonville held the hosts until McGovern's second-half dismissal.

A straight red card for a foul was followed by Rene Mihelic netting from the resulting free-kick on 55 minutes.

Cliftonville impressed in the first leg but they were missing prolific striker Joe Gormley because of a knee injury.

The Hungarians made a strong start at Nagyerdei Stadion and Dalibor Volas hit the woodwork in the ninth minute.

Conor Devlin was the busier keeper and he twice denied Adam Bodi before keeping out a Jozsef Varga effort.

Bodi saw another strike saved by Devlin before McGovern was dismissed on 54 minutes after a challenge on Volas.

Mihelic stepped up to score from the free-kick and Volas wasted a good opportunity to double the lead three minutes later.

Jude Winchester had a shot blocked as the Reds went in search of an equaliser but hopes of a comeback faded after Sidibe's goal 11 minutes from time.

Debrecen now face Belarusian side FC Bate Borisov in the third qualifying round.