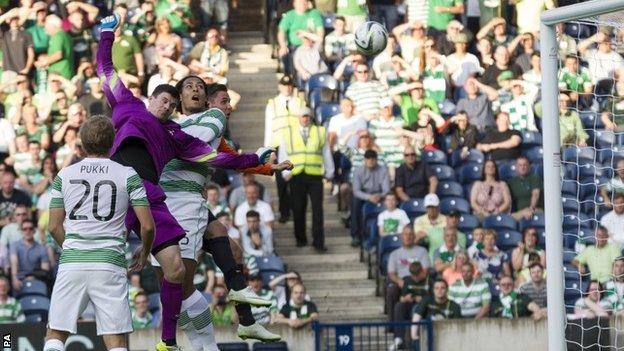 Virgil van Dijk and Teemu Pukki were the heroes as Celtic outclassed KR Reykjavik at Murrayfield to stroll into the third qualifying round of the Champions League.

Dutch defender Van Dijk helped himself to an early double before Pukki repaid manager Ronny Deila's faith with a third before half-time.

The impressive Pukki completed his own double late in the second half.

Either St Patrick's Athletic or Legia Warsaw now wait in the next round.

Celtic had taken up residence in Edinburgh with Celtic Park hosting the opening ceremony for the Commonwealth Games, but they showed no signs of homesickness with a slick performance against limited opposition.

Trailing 1-0 from the first leg, KR had the first chance when English striker Gary Martin hit the post in the opening minute. But the deflected effort would not have counted with the assistant's flag waving. However, Van Dijk and Efe Ambrose had not looked too clever and it was an early wake-up call.

That was as close as the part-timers from Iceland would get as Deila's men finished off the tie as a contest with two goals inside 20 minutes.

Pukki, so often a frustrated figure under previous manager Neil Lennon, was given a starting berth by Deila and he showed his eagerness to impress with an early shot at the goalkeeper after a driving run by Kris Commons.

Stefan Magnusson did well to block the Finnish striker's shot and the follow-up from Leigh Griffiths, but he was at fault as Celtic took the lead.

He flapped at a Commons corner, allowing Charlie Mulgrew to head back across goal for Van Dijk to stab into the net.

Magnusson was at fault again as the Dutchman grabbed a second; taking advantage of a missed punch to finish Lustig's headed lay-off.

Last week's goalscorer Callum McGregor was looking lively, and the 21-year-old hit the byeline to play a great ball for Pukki who slammed in the goal his first-half performance deserved on 27 minutes.

Last season's player of the year Commons was still looking for his first goal of the new campaign and he stung the palms of Magnusson twice within four minutes with two fierce shots from distance.

It was Pukki who had stolen his golden touch and he made it 4-0 when he knocked the ball past the goalkeeper who had rushed from goal and rifled into the top corner.

Commons was determined to add his name to the scoresheet but the post denied him late on.