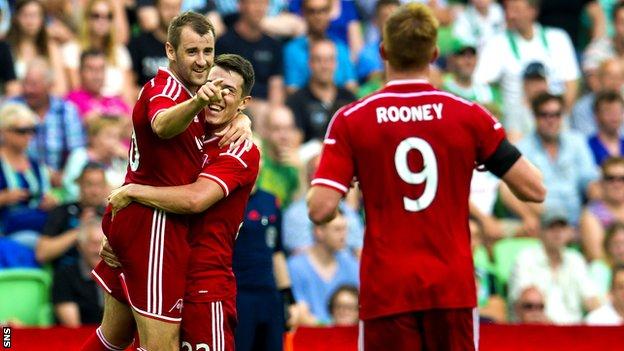 Aberdeen booked their place in the third qualifying round of the Europa League with a fantastic win in the Netherlands against FC Groningen.

A superb first-half performance built the foundations for victory.

Maikel Kieftenbeld pulled one back for Groningen but they never looked like recovering against Derek McInnes' impressive Dons.

The Pittodrie men now face Spanish La Liga side Real Sociedad in the next round, with the first leg in Spain next Thursday.

The match was preceded by a minute's silence as a mark of respect for those who lost their lives on the Malaysian Airlines plane that crashed in Eastern Ukraine a week ago.

193 of the 298 passengers on board were Dutch and flags around the country have been flying at half mast.

Derek McInnes opted to leave the experienced Barry Robson on the bench, replacing him with Andrew Considine. That allowed Jonny Hayes to move into a more attacking role on the left.

Groningen boss Erwin van der Looi stuck with the same starting 11 that had drawn 0-0 in the first leg last week. The goal-less Pittodrie draw was viewed as a good result by both clubs, and the noises from the Dutch camp suggested they felt the tie was theirs before the second leg began.

How wrong they were.

The match got underway in the north east Dutch sunshine and green smoke billowing from smoke bombs in the home sections.

McGinn tried to make an early impression but his shot from the angle of the box was easily held by home keeper Sergio Padt.

Groningen threatened a minute later when Nick van der Velden's corner found Kappelhof whose looping header was nodded off the line by Hayes before Padt smothered at the feet of Rooney.

Reynolds handed the visiting 1,100 fans a nervy moment, losing the ball on the centre circle. Kostic was in on goal but couldn't finish beyond Langfield.

After weathering the early storm the Dons found themselves in front.

A wonderful Hayes run was illegally ended by Groningen's Brazilian defender Erik Botteghin and the Polish referee pointed straight to the spot.

Rooney drilled the penalty low to the keeper's right for a crucial away goal with his sixth of this European run.

A second arrived shortly after when Rooney found himself goal side before lobbing Padt, the ball bounced off the crossbar and McGinn was there to gobble up the rebound.

The goals were met with delight by the boisterous Dons fans up the other end of the Euroborg.

However, the arrears were halved two minutes before half-time.

That saw the Eredivisie side move up a gear after the break and Chery and Kostic looked particularly threatening, the former testing Langfield from long range on more than one occasion.

Substitute Michael de Leeuw went closest on the hour mark, but Langfield saved brilliantly to keep him out.

Groningen huffed and puffed throughout the second half but the Dons didn't have a single failure in their ranks.

They stemmed the tide whenever it came rampaging towards them with Russell Anderson, Mark Reynolds, Shaleum Logan and Considine a miserly back four.

The excellent Ryan Jack and Willo Flood provided watertight protection in front of them.

The Dons saw it out and will make their way to San Sebastián and next week's first leg in good form and good heart.