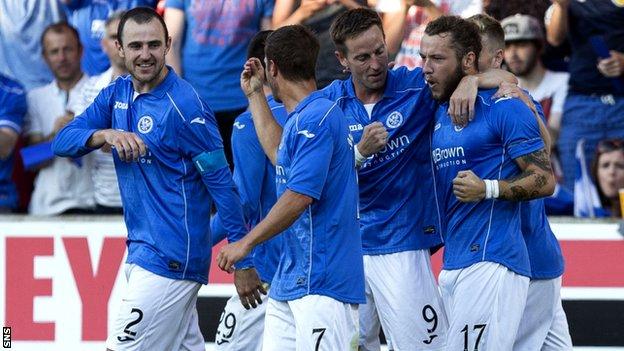 St Johnstone exorcised the ghost of last season's penalty shoot-out defeat by Minsk as they saw off Luzern in the Europa League second qualifying round.

Stevie May blasted the home side in front from the penalty spot.

However, strong pressure from the Swiss paid dividends in the second-half as Marco Schneuwly prodded home to level.

With the tie at 2-2 on aggregate, Alan Mannus pulled off a great save to give Saints the edge in the shoot-out, with Tam Scobbie netting the vital strike.

It's not often that McDiarmid Park is described as a cauldron of noise but both sets of fans contributed to a frenzied atmosphere rarely heard in Perth as kick-off approached.

And it was the visitors who started with most attacking intent, Oliver Bozanic's effort from the edge of the box watched carefully by Mannus as it drifted narrowly over.

Mannus had clearly been watching too many videos of German "sweeper-keeper" Manuel Neuer as he raced out of his box only to pass his clearance straight to Adrian Winter, whose first-time drive flashed wide.

The Swiss side continued to enjoy the lion's share of possession, with Saints forced into hopeful long balls; but the home side were awarded a golden opportunity when Gary Miller was pushed in the box and the Belgian referee pointed to the spot.

The talismanic May lashed the ball high into the net to put Saints in front.

Saints were living dangerously as the first half wore to a close with Dario Lezcano passing up two good chances inside the penalty area.

The second period began in much the same vein, with Swiss domination repeatedly foundering upon a resolute blue wall marshalled by Dave Mackay and Frazer Wright.

However, their perseverance was rewarded as Schneuwly - Luzern's scorer in the first leg - pounced as the ball ricocheted in the home box and poked the ball in from eight yards.

It was no more than the vociferously-supported Swiss deserved.

Saints were finding it hard to lift themselves from the blow of losing the equaliser, and Michael O'Halloran should have done better than his weak effort from 18 yards after dribbling past three defenders.

Schneuwly was providing Luzern with an attacking focal point they had been lacking despite all their previous pressure, and he again tested Mannus with a smart turn and shot which keeper did well to smother.

Saints engineered a smart counter-attack late on, but May elected to shoot tamely when he had options to both right and left.

David Wotherspoon carved out the first chance of a cagey first period of extra-time, but Luzern continued to create the better opportunities.

Luzern began to turn the screw as extra time wore on and a beautiful break down the left led to a low cross falling to Lezcano on the penalty spot, but, not for the first time, his effort was well off-target.

Right at the death it seemed Saints would snatch a winner, as Lee Croft's delightful low cross fell perfectly for substitute Liam Caddis, but his shot cannoned back off the post and out.

And so to the drama of the shoot-out where Mannus proved the hero, diving smartly to keep out the kick of the impressive Schneuwly and Scobbie kept his nerve to send Saints fans into rapture.