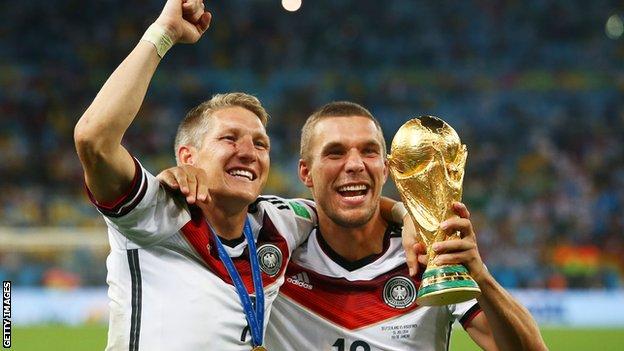 Scotland will not alter their approach when they face world champions Germany, manager Gordon Strachan insisted.

The Scots open their Euro 2016 qualifying in Dortmund on 7 September. They will also face Poland, Republic of Ireland, Georgia and Gibraltar.

"I was writing down plans and I looked at the board and thought, 'yeah, I've cracked it'," said Strachan of his plan to counter Joachim Low's side.

"Then I realised I had 14 men playing. But we're not going to change."

The Scotland manager thinks it could be counter-productive to adapt his own tactics against a side who he considers worthy World-Cup winners.

"You could chop and change for everybody you're playing against, it could confuse the players," he said.

We hope we will have a team unit that can play against anybody, until the time we develop world-class stars

"We have a couple of ways of defending and we're working on our attacking," he said. "But that will take time to really click and fully get what I want.

"Until that time we want to keep on winning games and gradually get to where we want to go."

The 2-2 friendly draw with Nigeria in London in May stretched Scotland's unbeaten run to six matches.

However, the Tartan Army were jealous onlookers during the World Cup, which was won by Mario Gotze's extra-time winner for the Germans against Argentina.

"I just think it makes it more exciting," said Strachan of the game at the Westfalenstadion. "It's gone up a level and we're looking forward to it.

"We were encouraged by the way Chile played in Germany recently, Chile were absolutely fantastic [losing in a 1-0 friendly].

"But now it's up a level, you're playing the world champions. So it's a fantastic experience for us. We're all looking forward to it as coaches and players. We want to test ourselves against the best teams, and they are a team, that's for sure."

Strachan thinks other managers and nations can learn from the Germans, but not necessarily put those lessons into practice.

"In one of my first interviews in this job someone asked me what style I like," he said. "I think I shocked them by saying Germany.

"Then I thought, 'oh no, I can see the headline: We want to be the new Germany'. Which is not what I meant.

"But the Germans, of all the top teams, they look like a team. The other ones were based on waiting for individuals to produce a certain bit of form. But the Germans were a team.

"I can learn from Colin Montgomerie. Can I do his swing? No. I'd like to play tennis like Andy Murray but I don't have the weapons for that.

"You build your team on what you've got. I can see every coach in the world heading to Germany to see what's happening there but that's the way they are.

"If you look at the likes of Costa Rica, Algeria, Chile, Australia to a certain extent, they didn't have top, top players, so what they do is look like a team. They actually have to work harder because they've not got the stars to win games.

"We're in that bracket. We hope we will have a team unit that can play against anybody, until the time we develop world-class stars. We're confident with the style we've got that we can give everybody a game."