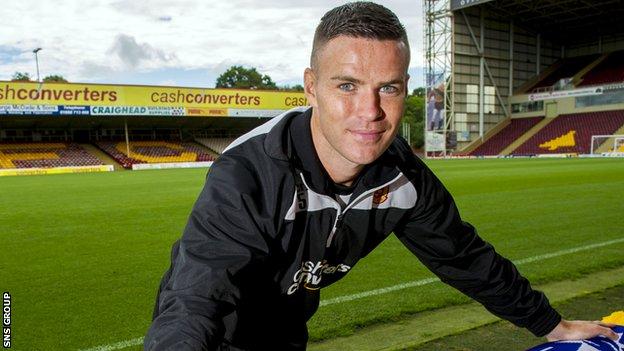 Simon Ramsden is raring to go as Motherwell prepare to face Stjarnan at Fir Park in the second round of Europa League qualifying.

The 32-year-old defender has not played since January following a knee injury.

"I am looking forward to getting out there and feeling the buzz of playing competitive football again," he told BBC Scotland.

"The onus is on us to go out there and get a victory to take over to Iceland next week."

Last year, Motherwell fell at their first hurdle, losing a third qualifying round tie against Russian side Kuban Krasnodar in the same competition.

"Previously we weren't the favourites, but it has swung round a bit," said Ramsden.

After an abrupt end to last season, the Englishman is now looking forward to getting back on the pitch and returning to his previous form.

"I would like to get back in to the consistency that I was showing last season."

With Sean Hutchison's departure to Fulham, Ramsden will get the chance to play in his preferred centre-half position, having been utilised as a full-back for much of his Fir park career.

"Currently it is looking like I may be playing centre half but the manager has spoken to the press about wanting to bring another centre-half in for competition," he added.

"To be honest after the end of season I had last year as long as I am available for selection, that is all that matters to me."

Ramsden recognises that Stjarnan, who are currently ranked second in the Icelandic league with 11 wins already this season, will put Motherwell under pressure.

"Games aren't won on paper we need to go out there and demonstrate our quality which we have already shown finishing second in the league last season," he said.

"We just need to focus and be patient and wait for the chances to come.

"If we could keep a clean sheet then it would be a massive bonus, to then build on to go forward.

"There is a lot of optimism around the club that we can hopefully get through this tie. Everyone is aware of how tight knit the group is and it is up to us to go out there and show it."