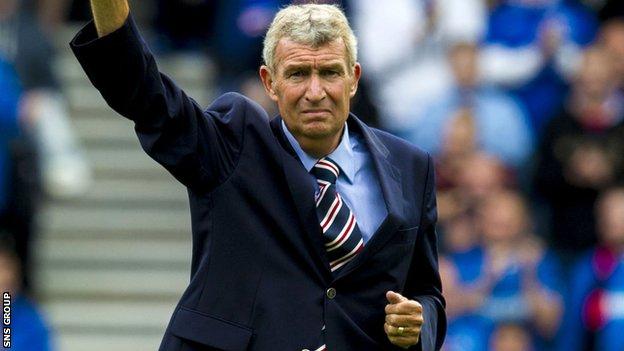 Rangers are to honour former captain Sandy Jardine by renaming the Govan Stand at Ibrox after the defender.

Jardine, who played more than 600 games for Rangers, died in April, aged 65, after an 18-month battle with cancer.

He was part of the European Cup Winners' Cup-winning team of 1972 and won two domestic trebles in his 18 years with the club.

The Scotland international also worked for Rangers' commercial department and was a club ambassador.

Rangers say the dedication will be in place in time for the opening Scottish Championship fixture of the season against Hearts - another of Jardine's former teams - at Ibrox on 10 August.

"Sandy Jardine epitomised everything that is good about Rangers Football Club," said chief executive Graham Wallace. "He was a man of principle and class and his contribution throughout his career both on and off the pitch was truly incredible.

"His achievements are unlikely to be seen again in the modern game and this is a truly fitting way to honour Sandy's memory. The renaming of the Govan Stand will be a permanent tribute to a man who gave everything for Rangers."

Jardine was twice named player of the year in Scotland and featured in two World Cups, winning 38 caps.