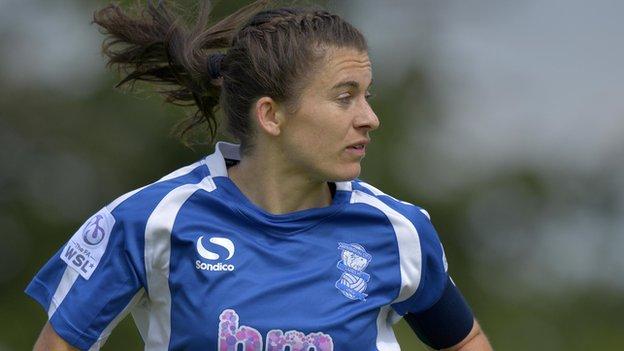 Blues were thrashed 5-0 in the Continental Cup by Bristol on Sunday, but with key players back they retained their unbeaten league record.

Chelsea stayed three points behind Birmingham with a 2-1 win over Arsenal.

As Bristol hit back Blues goalkeeper Rebecca Spencer had to make good saves from Spaniard Natalia and her strike partner Nicola Watts.

But the home side increased their lead 10 minutes into the second half, striker Westwood tapping the ball in from a Jo Potter cross.

Two minutes later Academy reduced the arrears through a Hannah Evans own goal, the defender miscuing an intended clearance into the net.

But despite some late pressure the visitors were unable to force an equaliser.

Neither goal was seriously threatened in the first half, but six minutes after the break Japanese striker Yuki Ogimi's neat chip put Chelsea in front.

Ji So-yun drove in a 20-yard free-kick to double the advantage 13 minutes later.

But within two minutes Arsenal were back in the game through a Kelly Smith penalty.

As the Gunners pressed in the closing stages, midfielder Jordan Nobbs forced keeper Marie Hourihan into a fine save.

But that could not prevent the home side from completing a victory that avenged defeats by Arsenal in both the FA Cup and Continental Cup this season.

The Gunners remain second bottom of the table with four points from six games.

Liverpool's win kept them in touch with the leaders but meant that Everton stayed bottom, two points adrift of Arsenal.

The Reds went ahead in the 13th minute, Longhurst curling a shot into the roof of the net from striker Natasha Dowie's cross.

Dowie went close with a header from a Fara Williams free-kick as the home side looked to increase their lead.

But the Toffees posed a threat of their own, midfielder Brooke Chaplen making some dangerous runs.

Chaplen and Nikita Parris both narrowly missed the target in the second half, but Liverpool saw the game out to claim the points.