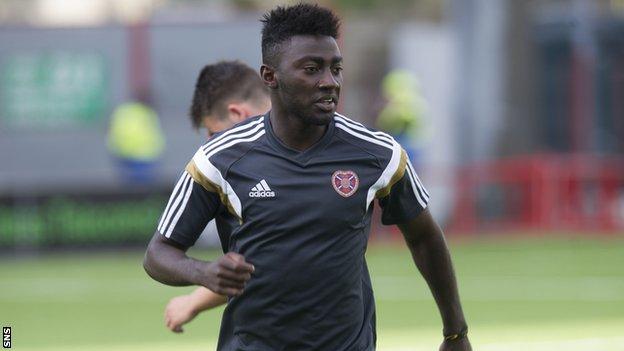 The Ghanaian midfielder signed a one-year deal after impressing on trial.

"He's been at training for the last two weeks and he's played a few games for us.

"He's looking good and he's a top player. He's played in the SPL for a long time and he's played in England at a very high level so I'm pleased to get him.

"He gives us a bit of strength in there. We've got some good options now in the middle of the field. He's a good character as well.

"He hadn't done a pre-season after he finished up last season so I just wanted to see where he was and he's a fit guy.

"If this is the condition he's in, having only trained for just over a week, then I'm looking forward to seeing what we can get out of him in two or three weeks time."

Buaben moved to Dundee United in 2007 and was part of the side that won the Scottish Cup in 2010.

He also had a short spell on loan last season at Partick Thistle.