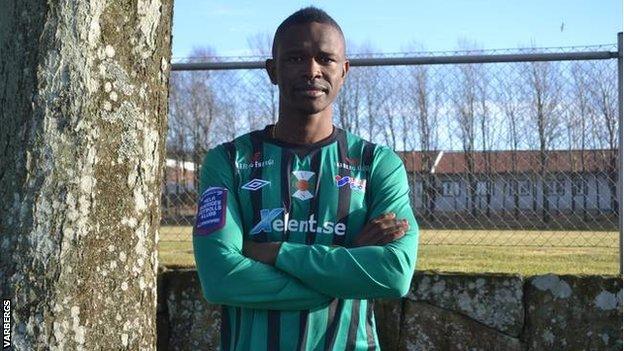 Sierra Leone international Ibrahim Koroma has protested his innocence after being suspended by his country over match-fixing allegations.

Koroma is one of a group of 15 who have been suspend indefinitely by the Sierra Leone Football Association.

The allegations relate to a World Cup qualifier in 2008 against South Africa, which ended goalless.

"I know I am innocent. I feel like I have been betrayed by my country," Koroma told BBC Sport.

"It has left a bitter taste in my mouth. I can't do anything normal because this is really strange.

"The game they accuse me of match-fixing was one of my best games for my country. As a young player at that time I was so proud of myself because we were underdogs against South Africa and we went there and we gave everything we had to get a draw.

The 25-year-old is one of four players who have been suspended by the SLFA, along with three referees and eight officials, including football administrator Rodney Michael.

The SLFA and Sierra Leone's Ministry of Sports said in a statement on Wednesday they had had received "credible and tangible information" on the alleged involvement of the group in match-fixing.

The ban does not extend worldwide as it has not been enforced by Fifa so Koroma is still able to play for his club Varbergs in the Swedish league's second tier.

He has, however, been withdrawn from the Sierra Leone squad to play in Saturday's Africa Cup of Nations qualifier against Seychelles in Freetown.

"I had already prepared myself to go to Sierra Leone and play the match. But I got a message from the coach saying I had been suspended," Koroma said.

"The SLFA sent a message to my email about the suspension, to which I replied and said I am willing to face any investigation any time, anywhere in the world.

"I have played for my country from Under-17s right up to the senior level and I have always had a good feeling playing for my country.

"But I don't think I can forget this. I will not say I will not play for Sierra Leone again, but right now I feel let down."