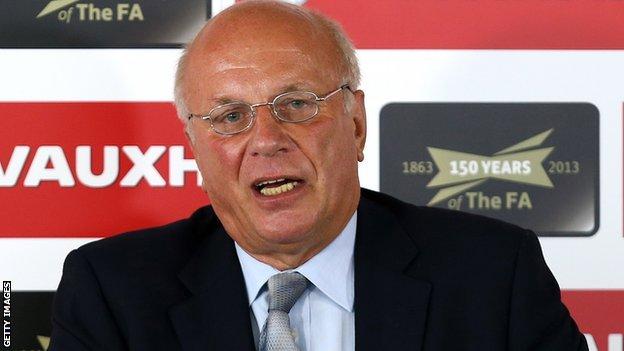 Football Association chairman Greg Dyke will on Tuesday face questions from MPs over the awarding of hosting rights for the 2018 and 2022 World Cups.

Members of the Culture, Media and Sport Select Committee will ask if Dyke would support the Crown Prosecution Service bringing a case against Fifa.

The organisation is in the spotlight over allegations of corruption in the bidding process for both tournaments.

The role of Fifa president Sepp Blatter is likely to be scrutinised too.

Following a series of financial and voting scandals football's world governing body has undergone a period of reform over the past three years.

Mr Blatter declared last month that the reform period was over and had been successfully introduced.

However, it is believed MPs will ask Dyke if the FA should withdraw from Fifa if further reform is not forthcoming.

Questions are also likely to be asked about the possibility and likelihood of other national associations breaking away.

The European football confederation, Uefa, stunned Mr Blatter in June when its president, Michel Platini, and several of its leading members told him they believed he should not seek re-election next year and should stand aside for the good of the game.

Mr Dyke also used that meeting in a Sao Paulo hotel to tell the Fifa president it was "totally unacceptable" to claim allegations of corruption against Qatar's winning 2022 bid, made by the British media, were motivated by racism.

MPs are therefore thought likely to probe Mr Dyke's thoughts on Mr Blatter's continued leadership given his recent remarks that he was against what he called "the cult of Blatter".

England's dismal performance at the Brazil World Cup will also be a topic for debate - but it is thought Dyke will point towards the establishment of the England Commission as evidence the FA is seeking to expand the pool of talented players available for future national team managers to select from.

Two Sunday Times journalists, Heidi Blake and Jonathan Calvert, are also due to give evidence to the committee.

Their appearance comes after their paper reported on leaked documents it obtained which they allege provide proof the disgraced Qatari football official Mohamed Bin Hammam made payments totalling US$5m (£3m) to football officials in return for their support for the Qatar bid.

Qatar 2022 vehemently deny any wrong-doing but with Tuesday's hearing subject to Parliamentary privilege - a long-standing right designed to protect MPs and witnesses from libel action - the committee could hear further allegations relating to the newspaper's inquiry.