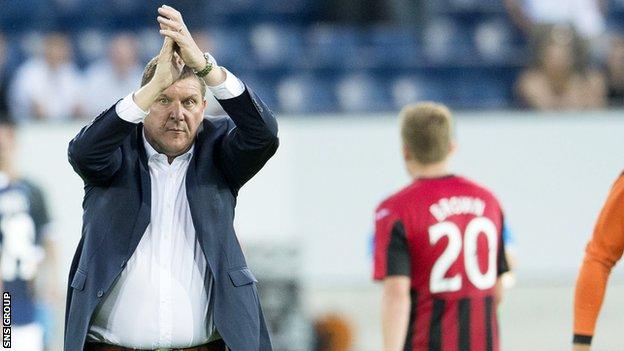 Steven MacLean shot the visitors in front on 47 minutes, with the Swiss side levelling 20 minutes later.

"I'm not saying we had the best opportunities in the game but I feel we did enough to deserve a draw," Wright told BBC Radio Scotland.

"Defending is an art and we love defending."

The home side were on the front foot for much of the game and created good openings in the latter stages of the first half.

"In the first half we didn't stop enough crosses into the box but Luzern were even better than I thought they were," explained the Scottish Cup-winning manager.

"They play at a better tempo than Rosenborg and it was a tougher game than Rosenborg, particularly with the conditions. I believe it was 32C.

"We didn't have many options for fresh legs on the bench

"We were a bit concerned someone would make a mistake but it didn't happen and that's credit to the players.

"We try to make it difficult for teams but what we didn't do in the first half was get two or three passes together to get up the pitch.

"We managed to do that at the start of the second half - and that's important when you are playing one up top and one just off him.

"That allowed Lee Croft and David Wotherspoon to get higher up the pitch and enabled our full-backs to get up too."

Dave Mackay went close to doubling the visitors' lead with an effort from a corner soon after MacLean's goal and St Johnstone may look to profit from set-pieces in next week's return leg.

"Having watched them, we thought we could cause them problems at set-plays," said Wright. "They have two new centre-backs and it may take them time to bed in. Every time we put the ball in the box we caused them problems."

Wright also thought his side were hard done by when Marco Schneuwly turned to drive in the equalising goal.

"His elbow is above shoulder height and I think it should have been a foul on Frazer (Wright)," was the Northern Irishman's opinion.