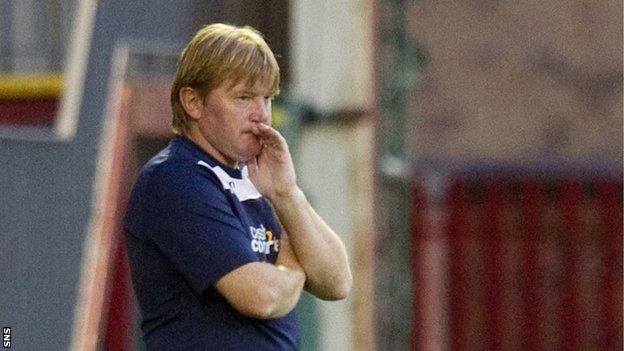 "If we're honest, it could've been six all. Being 2-0 up, it's then a disappointing scoreline but we're by no means out of the game," said McCall.

All in all, disappointed not to have won the game but it's all to play for

Law fired Motherwell into a two-goal lead before Finsen reduced the deficit with the first of his two penalties, following a Keith Lasley handball.

With the hosts pressing for a third goal, Stjarnan snatched a late equaliser after Lasley pulled back Rolf Toft.

"Where we've been unfortunate is that both penalties have come from unbelievable ricochets and deflections back into the box," said McCall.

"They could've gone one up quite easily and missed a good chance. Then we took control of the game and played some really good football.

"At 2-0, we're looking to go and add to that. In the second half they've had good chances and so have we.

"But listen, it's our first competitive game and I think you could tell that we're rusty in a lot of areas.

"Someone shouted from behind (the dugout) that we were 'playing nothing' but they were good players and I knew they'd create chances against us.

"We'd have been happy to have gone over there with any sort of victory; 2-1 we'd have been more than pleased. It's all to play for now."

McCall praised his debutant for his two goals and his all-round display.

"He's shown in training that he can score goals and get in there," said the Motherwell boss. "He did that and we've had other opportunities: Keith Lasley's had a shot blocked and Sutty's just gone wide.

"But in the second half they've had some good opportunities that they've missed the target with.

"All in all, disappointed not to have won the game but it's all to play for. "